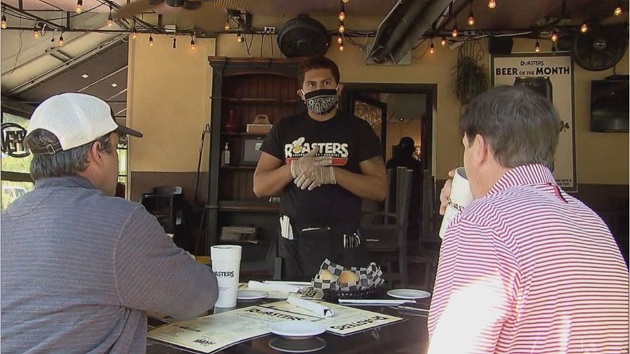 (NEW YORK) — BY: KELLY MCCARTHYThe food and restaurant industry has been hit hard by the coronavirus pandemic, with a new survey reporting a seismic drop in sales with billions in lost revenue.According to a survey conducted by the National Restaurant Association, the restaurant and food service industry likely lost nearly $120 billion in sales during the first three months of the pandemic. While some diners have trickled back to tables at restaurants in states that have eased restrictions, the latest survey found that despite a “sales uptick in May, the restaurant industry’s business environment is far from normal, and overall losses continue to mount.”

New research from the @WeRRestaurants indicates that the restaurant industry has lost $120 billion in sales during the last three months due to the impact of coronavirus in the United States. https://t.co/AzYL0XDWRo pic.twitter.com/pcXIWIGmnB

— SCRLA (@SCRLA) June 16, 2020 Eateries and bars registered $38.6 billion in sales on a seasonally-adjusted basis in May, according to preliminary data from the U.S. Census Bureau.Although that figure is nearly $9 billion more than reported in April, it was down $27 billion from previous sales levels in January and February, before the COVID-19 outbreak in the U.S.April’s sales volume of $29.9 billion at restaurants and bars recorded by the Census Bureau represented the lowest numbers since February 1983.”In recent years, May was typically the top sales month for restaurants, based on the unadjusted data,” a National Restaurant Association official said. “On average during the last five years, May sales at eating and drinking places were more than 5% higher than the average monthly sales volume for the entire year. This year, May sales were more than 40% lower than what would have been expected in the absence of the pandemic.”Sales at eating and drinking establishments were down more than $94 billion from expected levels between March and May.”Add in the sharp reduction in spending at non-restaurant food service operations in the lodging, arts/entertainment/recreation, education, health care and retail sectors, and the total shortfall in restaurant and food service sales likely surpassed $120 billion during the last three months,” the association official said.The association’s chief economist, Bruce Grindy, contributed to their report.