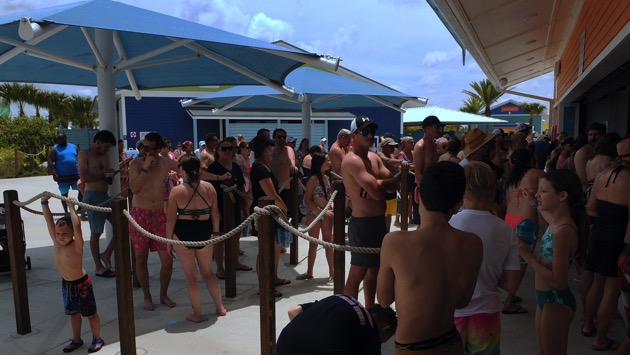 People wait in line at a snack bar at Island H2O Live! water park as the attraction becomes the only major water park in the Orlando area to reopen for Memorial Day weekend after closing for the coronavirus pandemic. - (Paul Hennessy/SOPA Images/LightRocket via Getty Images)
Posted on June 17, 2020 by ABC News

By DR. STEPHANIE E. FARBER and DR. JESSICA JOHNSON, ABC News(NEW YORK) — New data from across the globe shows young people who are tested for COVID-19 have a higher rate of positive results and could be spreading the virus among each other — and to older or more vulnerable people.In the United States, the increase in new infections in some states is being blamed on young people not observing social distancing rules, with Texas Gov. Greg Abbott saying the rising cases in Hays County mostly are people younger than 30.Meanwhile, new information from the Florida Department of Health shows that individuals under 18 are testing positive at nearly double the rate of Florida residents overall. And in California, a new analysis found that nearly half of new diagnoses are in individuals younger than 35.Across the Pacific, new research from Japan suggests that younger people may be driving the spread of disease in communities, even when they’re not showing symptoms.The study from Japan, released by the Centers for Disease Control and Prevention in the U.S., took a close look at various COVID-19 “clusters,” meaning groups of five or more cases thought to have a common exposure source, based on contact tracing. Researchers found that outside of health care facilities, spread occurred in places where large groups congregated in close proximity.Transmission at restaurants, bars, concerts, gyms and other places seeing large gatherings accounted for more than a third of the identified clusters. Half of COVID-19 clusters in the community were traced back to a patient under the age of 40, and 41% of the original cases did not show symptoms at the time of transmission.Dr. Glenn Fennelly, chair of the Rutgers Department of Pediatrics, told ABC News that because children, adolescents and young adults are much less likely than adults to develop symptoms or severe complications from COVID-19, they tend to feel better when infected and may be more likely to continue interacting with others rather than isolating at home.”Young people often feel that they are invulnerable to harm or danger, and that nothing bad will happen to them,” Fennelly said. “Because of this, they may discount the importance of physical distancing and wearing masks.”Collectively, these findings are consistent with current CDC surveillance data that indicates that, although adults account for the vast majority of total COVID-19 cases, the percentage of people younger than 18 who’ve tested positive is actually higher.Pediatricians interviewed by ABC News emphasized caution interpreting the new data. Dr. John Brownstein, a pediatrician and epidemiologist from Harvard University, said testing kids might be different than testing adults, so it’s important to take this information with a grain of salt.”Adults are tested more broadly. Kids are tested more selectively and may have a higher rate of positives,” Brownstein said. In other words, in order to avoid unnecessary and potentially invasive medical ordeals in children, younger people generally are tested only when they have clear symptoms, making positive tests more likely.Dr. Lawrence Kleinman, a pediatrician and public health researcher at Rutgers, agreed with Brownstein. Based on Florida census data, he estimates that COVID testing occurs over nine times more frequently in adults than in children. This difference in testing frequency means we cannot yet conclude coronavirus transmission is higher in kids than adults.”This is a case study of the importance of understanding the denominator when considering the meaning of numbers. Details matter,” Kleinman added.Another explanation for the less frequent, more selective coronavirus testing in children was early data that the virus seemed to spare them. Now, we know that the virus affects them less severely, but children and young adults can still become infected. But, Kleinman said, to really understand whether COVID-19 is spreading like wildfire among young people, “They should be testing more children.”One argument for testing more young people is that children, who are usually asymptomatic or only mildly symptomatic, can unknowingly take the virus home to siblings, parents, grandparents — people who may be more vulnerable to the virus.”The reopening of childcare, summer camps, sports and schools should be accompanied by mitigation efforts, including social distancing, wearing masks, hand washing” in the pediatric population especially, Kleinman said.Fennelly fears effective messaging about the importance of universal precautions, including mask wearing, physical distancing and crowd avoidance may not be reaching young people.”Although there have been several examples of media directed to teach younger children facts about COVID-19 — including joint Sesame Street-CNN initiatives — examples of media targeting teens appear to be less prominent,” Fennelly said. Copyright © 2020, ABC Audio. All rights reserved.