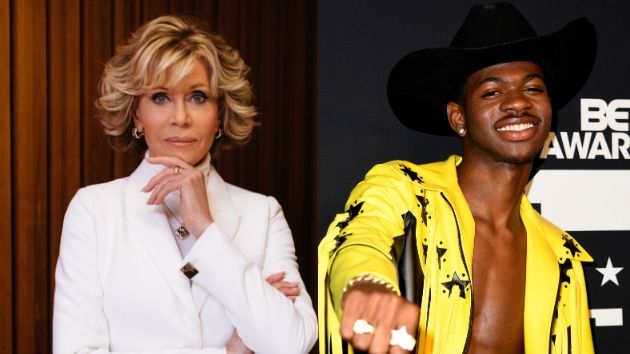 (LOS ANGELES) — Gucci had the perfect person in mind when launching their new sustainable line: Jane Fonda.  The climate change activist, who vowed in 2019 that she will never buy a new article of clothing again, is the new face of the luxury brand’s latest campaign.

Not only that, Gucci revealed on Tuesday that, accompanying Fonda, is “Old Town Road” artist Lil Nas X.

The campaign is dubbed “Gucci Off The Grid,” which boasts products made from recyclable and organic materials in order to cut down on pollution.   The collection is the first line produced by the brand’s new sustainable arm, Gucci Circular Lines.

The ad featuring the new products shows Lil Nas X and Fonda shunning city life in order to build their own home made out of twigs, leaves and other sustainable objects.  Their efforts attract King Princess, Miyavi, and David de Rothschild, who not only help construct the home but join the duo in planting new trees.

Gucci’s creative director Alessandro Michele revealed that the teamwork demonstrated by climate activists is what inspired him to create a sustainable line.  “The collection is the result of teamwork; everybody brought something to it,” he said in a press release obtained by WWD. “And in the campaign, too, there is this idea of dialogue among people building something new.”

Concluded Michele, “I imagined that we could build a treehouse in a city centre, all together, like kids playing in the park. Because all of us need to build this house or to find out that our planet exists, even where it seems it’s not there, or it’s far away.”

Fonda, an outspoken climate activist, rallies for meaningful legislation to cut down on pollution and promote green energy by participating in her Fire Drill Fridays — which she virtually hosts on TikTok.