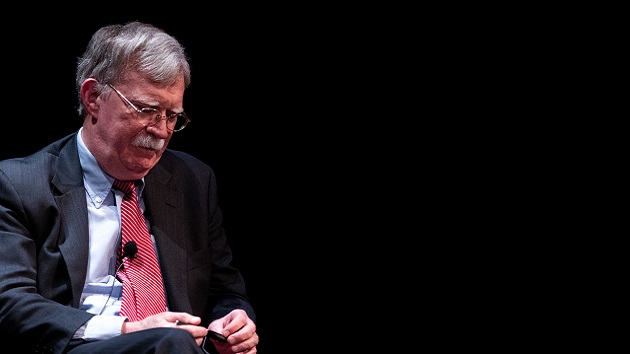 By CONOR FINNEGAN, ABC NEWS(WASHINGTON) — President Donald Trump’s former national security adviser John Bolton told ABC News that he thinks Russian President Vladimir Putin thinks he can play Trump “like a fiddle.””I think Putin thinks he can play him like a fiddle. I think Putin is– smart, tough. He plays a bad hand extremely well. And I think — I — I think he sees that — he’s not faced with a serious adversary here,” Bolton said in the exclusive interview.Bolton is is scheduled to release on June 23an explosive book about his 17 months in the White House, in which he paints Trump as “stunningly uninformed,” ignorant of basic facts and easily manipulated by foreign adversaries.”When you’re dealing with somebody like Putin, who has made his life understanding Russia’s strategic position in the world, against Donald Trump, who doesn’t enjoy reading about these issues or learning about them, it’s a very difficult position for America to be in,” Bolton told ABC News chief global affairs correspondent Martha Raddatz.Bolton’s comments, in addition to the many stories he shares in the book, “The Room Where It Happened,” amount to a stunning indictment of a sitting president by one of his own former top advisers.Bolton departed the White House last September, saying he resigned while Trump has said he was fired. In his book and interview, Bolton said Trump lied about the circumstances of his departure and many other things.Telling Raddatz about one alleged Trump lie, Bolton added, “And it’s not the first time.”While Trump has cast himself as the ultimate deal-maker, Bolton attacks that image with accounts of what he says happened in meetings with Putin, North Korea’s Kim Jong Un, China’s Xi Jinping, Turkey’s Recep Tayyip Erdogan and more.”The president may well be a superb deal-maker when it comes to Manhattan real estate,” Bolton told ABC News, but Putin “sees that he’s not faced with a serious adversary here, and he works on him, and he works on him, and he works on him. … I don’t think he’s worried about Donald Trump.”Trump was “marked” by Putin, Kim and Xi, Bolton said, adding that they were eager to meet Trump alone without advisers, so that they could flatter and manipulate him.In particular, Bolton says it was easy for foreign adversaries to take advantage of Trump because they knew how obsessed he is with winning reelection this November.”I am hard pressed to identify any significant Trump decision during my tenure that wasn’t driven by re-election calculations,” Bolton wrote in the book, an advanced copy of which was obtained by ABC News.Bolton himself is not without controversy. Trump’s legal team painted him as “disgruntled” during the impeachment trial in the Senate when details of his manuscript first leaked. A hard-line conservative, he’s also known for his hawkish views on North Korea and Iran, which were often at odds with the president’s.Democrats have also criticized him for refusing to testify before the House impeachment hearings last fall. Instead, Bolton offered to speak before the Senate if subpoenaed, but the Republican-controlled body declined to hear from witnesses in the president’s trial.Bolton now says the House inquiry was too narrow and politicized and that Congress should have investigated Trump for additional possible impeachment offenses, including that Trump attempted to intervene in criminal probes of foreign companies as “personal favors to dictators he liked,” he wrote in the book.He also wrote that Trump treated “obstruction of justice as a way of life” and was even “pleading with Xi to ensure he’d win” reelection by asking China to purchase more wheat and soybeans — and with them, American farmers’ support for Trump.U.S. Trade Representative Robert Lighthizer said Wednesday, “Absolutely untrue. Never happened. I was there. I have no recollection of that ever happening. I don’t believe it’s true. I don’t believe it ever happened.”Copyright © 2020, ABC Audio. All rights reserved.