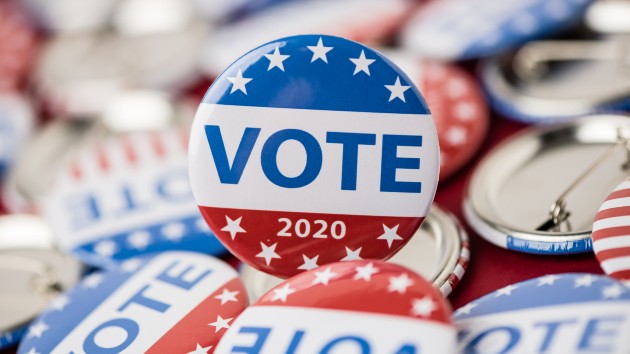 By GABRIELLA ABDUL-HAKIM and KENDALL KARSON, ABC News(WASHINGTON) — Local candidates are finding creative ways to campaign during the novel coronavirus pandemic.Keybo Taylor recently ran for Gwinnett County Sheriff in Georgia. It was his first campaign. Taylor said he usually has an easy time speaking with people he meets, and prior to the pandemic, he felt he was finding his footing during this year’s political cycle — but then COVID-19 hit and upended the election season. Campaigns ranging from the top of the ticket presidential primaries to down-ballot local and state races were forced to campaign digitally amid lockdown orders.”So, just as I felt like I was getting comfortable [campaigning], then all of a sudden the virus hit,” Taylor told ABC News.The shelter-in-place order for Georgia began on April 3, and primaries were originally scheduled for May 19 but were ultimately pushed back to June 9 due to the spread of the virus.Taylor and his team had to find new ways to spread his message.

“It changed the whole dynamics of what we were doing,” he said.Through mailers, Zoom calls and social media, they were able to contact potential voters.For Taylor, setting up a campaign was already a tough new experience to navigate, and the added digital pressure made it more frustrating.Times of crisis have forced candidates like Taylor to learn the challenges that come with building a virtual campaign trail.For his campaign, Taylor’s family members became his Zoom technicians, and he learned to adjust to campaigning over video conferencing, experiencing everything from awkward lag times to learning to stay engaged with an audience that’s not in the same room.During a virtual town hall on April 9, Taylor was muted after going over his allotted two-minute answer time. He ultimately didn’t get to finish answering the question, and he was unsure if voters were able to get the full message.”Sometimes you may miss some information and you may not get out what you actually intended,” Taylor said. “It’s just different, and it’s taking some getting used to.”Taylor narrowly lost the Democratic primary to fellow newcomer Curtis Clemons, who was backed by several elected officials.The initial awkward phase that plagues most Zoom calls is an unsettling hump to overcome — but for some candidates, the new normal has brought an unexpected way to connect to voters.U.S. Rep. Eliot Engel has held his seat in Congress for over 30 years. On June 2, he was overheard on a hot mic saying, “If I didn’t have a primary, I wouldn’t care,” when referencing the protests over George Floyd and police brutality in New York City.It was a startling revelation in the eyes of candidate Jamaal Bowman, a Bronx middle school principal who is hoping to oust this longtime incumbent during New York’s primaries on June 23.”That’s heartbreaking that someone who’s been in office 31 years could say that and feel that way,” Bowman told ABC News.As someone who is invested and deeply cares about his local community, he wants to make sure that those who feel disenfranchised by the government have a voice — something which ordinarily would be difficult during a pandemic that constricts contact. However, he said, pivoting to a virtual campaign wasn’t the biggest challenge. Instead, it was the psychological effects that took a toll.Bowman said, “It was the emotional stress and trauma of actually living through a pandemic — a pandemic that no one really understood.”He described the trauma as a “collective experience” that actually made virtual canvassing more personable.”We were missing human connection,” Bowman explained. “So that made a phone call that much more powerful, you know, making a call and connecting with someone and not talking about the campaign and not asking for money, but asking people, ‘How are [you] doing?"”For younger candidates, the transition has been fairly smooth. Already tech savvy, having to adjust to a digital campaign was a welcome challenge.Jake Tonkel is running for San José City Council (District 6) in California. Although his campaign relied heavily on door knocking, he had a strong social media presence from the beginning. But as California began shutting down, he too had to pivot from his traditional grassroots outreach techniques.”We made a really quick decision that now it’s about getting resources to the community,” Tonkel told ABC News. “It went from resource engagements to education, and then jumping into volunteer work.”Tonkel struggles with building trust with people he has never met. Before the pandemic, his team decided against doing many live videos, but as that is one of the only ways to communicate these days, his position changed.”Now we’re trying to make it more engaging and more entertaining and a bit more concrete,” he explained. “I’m excited about how we’ve been able to take my personality and build it into our social media platform.”As the world moves into a new coronavirus-laced era, successful community outreach will inevitably continue to transform.Under normal circumstances, the basic steps to running a successful campaign are figuring out what motivates a candidate to run, building a platform and a strong team, understanding what drives voters and finding donors. But nothing is normal during a pandemic.As of now, there are no more rallies, and many events have been postponed indefinitely. The Democratic Convention was moved from July to August, and it’s still up to debate on whether or not delegates will actually attend.Getting to know people and their problems through personal interactions is why many politicians answer the call for public service, but COVID-19 has taken those encounters away.”[It] really makes a difference to be in the voters community and [to] be in an iconic location,” Lynn Vavreck, a professor of American politics and public policy at UCLA, told ABC News. “[It] helps people feel like the candidate understands their experience.”Although states are beginning to reopen in phases, social distancing measures are still heavily in effect. Safely campaigning face-to-face may not be a possibility before the upcoming November elections.”[The] electioneering tactics that people use like direct mail, radio advertising, signs in yards, billboards — all those things are going to stay exactly the same,” said Vavreck. “The part that does change is the retail politics, the contact. Candidates are going to have to be really creative about how they make contact with people.”Copyright © 2020, ABC Audio. All rights reserved.

Ciara celebrates 36th birthday with husband Russell Wilson at the top of Seattle’s Space Needle
COVID-19 live updates: Unvaccinated Americans continue to drive infection, death rates
‘The Center Seat: 55 Years of Star Trek’ to debut Nov. 5 on The History Channel
Author Jeff Kinney teases the “misadventures” found in ﻿’Diary of a Wimpy Kid: ﻿Big Shot’
See Sandra Bullock as an ex-con in trailer for Netflix’s ‘The Unforgivable’
Chris Hemsworth once thought he was being written out of the MCU