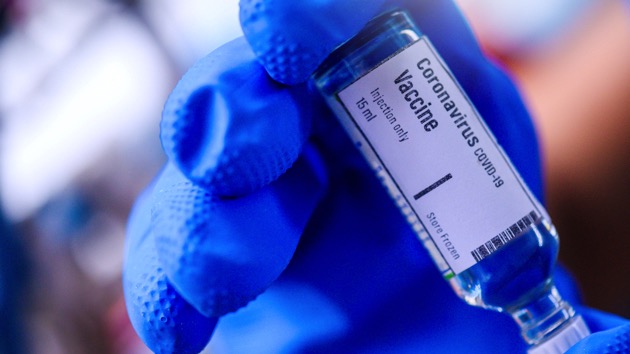 By ANNE FLAHERTY, ABC News(WASHINGTON) — A COVID-19 vaccine remains on track to reach the American public by January 2021, with the expectation that vulnerable communities like nursing homes and frontline “essential” workers would be inoculated first — for free — and the broader population would follow suit before flu season kicks in that fall, administration officials told reporters on Tuesday.The idea of generating 300 million doses by next year is an ambitious timeline dependent upon billions of taxpayer dollars.Officials, who spoke to reporters on Monday on condition of anonymity because they were not authorized to speak publicly, said the investment is small compared to the daily economic losses of a country whose businesses and schools remain shuttered.“While we are investing billions of dollars in this effort, it is to address a multi-trillion dollar challenge and opportunity,” said one administration official.“Operation Warp Speed,” led by the Department of Health and Human Services and Defense Department, aims to develop the 300 million vaccines in a fraction of the time it would normally take by sinking money early in production — and losing that money if a winning candidate is found to be unsafe or ineffective.Whereas a typical vaccine works through multiple phases and trials before moving into mass production — a process that can take years — the federal government says it will invest in mass production of an unproven vaccine if it shows promise. As soon as that candidate is proven to be safe and effective, the vaccine would be on hand to distribute to the broader population.Administration officials told reporters that 14 promising candidates have already been chosen for development and some are already in clinical trials with federal support. Those 14 candidates are currently being narrowed down to seven candidates, according to HHS.“We cannot promise 100 percent chance of success,” one official said. “What we can tell Americans is that we’ve taken every possible step to maximize the probability of success and shorten the timelines to getting safe, effective vaccines and therapeutics.”

HHS has already promised up to $1.2 billion in support for a vaccine candidate developed by AstraZeneca and the University of Oxford. That agreement promises at least 300 million doses of the vaccine for the United States, with clinical studies beginning this summer with approximately 30,000 U.S. volunteers.HHS also has given $456 million to Johnson & Johnson for its candidate, set to begin its first phase of clinical trials this summer, and $483 million for Moderna’s candidate vaccine, which began its first phase trail in mid March.When asked about cost, administration officials said Tuesday that COVID-19 vaccine doses developed with taxpayer money would be given to the U.S. government and then distributed – either for free to vulnerable populations or through private insurance.Officials say insurance companies have signaled a willingness to provide the vaccine shots at low cost. And the plan is a “tiered approach” for distribution — for example, providing the first doses to the elderly and people with pre-existing conditions.“Which populations are able and should receive a vaccine that is developed will depend on the results of clinical trials,” the official said.One major factor in picking a vaccine candidate will be in the ability to scale up production of that particular vaccine to 300 million doses. U.S. officials say they estimate some 20 million to 40 million Americans will already have antibodies to the virus and will be a lower priority for the first round of vaccines.Health officials have said they do not know how long immunity might last once a person has been exposed to the virus.Copyright © 2020, ABC Audio. All rights reserved.

Voting rights legislation across country looks to both restrict, expand access
County apologizes for seniors having to wait outside in cold for COVID-19 vaccine
COVID-19 ‘long-haulers’ trying to decode lasting symptoms a year after falling ill
US Army changes standards for women to allow ponytails, nail polish, breastfeeding
Netflix sends fans a thank you after ‘Bridgerton’ officially becomes its biggest original series ever
Paul Bettany confirms a major Marvel character will soon make their on-screen debut in ‘WandaVision’