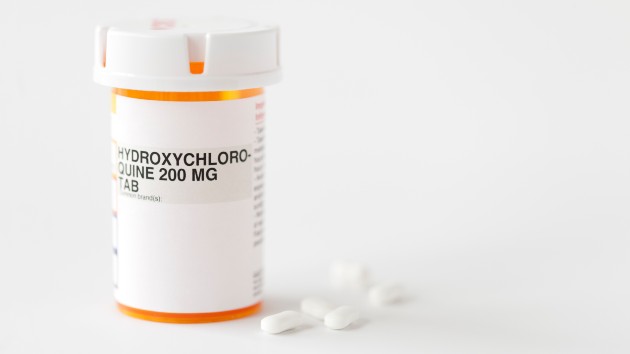 By STEPHANIE EBBS, ABC News(WASHINGTON) — The Food and Drug Administration said Monday it has revoked emergency authorization for hydroxychloroquine and chloroquine — the anti-malarial drugs touted and self-administered by President Donald Trump — to treat COVID-19, saying the evidence shows the recommended dose is unlikely to be effective against the virus.After reviewing new information from large clinical trials, the agency now believes that the suggested dosing regimens “are unlikely to produce an antiviral effect,” FDA chief scientist Denise Hinton said in a letter announcing the decision. The anti-malarial drugs, which also have been used to treat lupus and other conditions, aren’t being removed from the market. And the FDA says the drugs can still be prescribed by doctors for “off-label” uses if they think it’s appropriate. Clinical trials also will continue.But the emergency permission granted by the agency last February that added the drugs to the federal stockpile and allowed them to be distributed to states for use against COVID-19 will end.“We’ve made clear throughout the public health emergency that our actions will be guided by science and that our decisions may evolve as we learn more about the SARS-CoV-2 virus, review the latest data, and consider the balance of risks versus benefits of treatments for COVID-19,” said Anand Shah, the agency’s deputy commissioner for medical and scientific affairs.Recent data on the drugs has raised questions about whether the drugs were effective against the virus and whether possible side effects were worth the risk.The FDA now says the data indicates the drugs are not effective against COVID-19 and that, given the possibility of serious side effects, the risks no longer outweigh the potential benefit.Patients who are already being treated with hydroxychloroquine or chloroquine phosphate will be able to complete the prescribed regimen, FDA said on its website, but the drugs are not recommended to be administered to new patients outside of a clinical trial.Trump announced in May that he was taking hydroxychloriquine after repeatedly declaring it a “game changer” in the fight against COVID-19, drawing scrutiny from public health experts who warned the drug hadn’t been proven effective at fighting the virus and that a public rush could cause a shortage.This came after the FDA warned against taking the drug outside a hospital or clinical setting, and after health officials warned that it didn’t have evidence yet that it worked.When asked in March if the drug was promising, Anthony Fauci, the nation’s top infectious disease expert, said “the answer is no” because “the evidence you’re talking about … is anecdotal evidence.”“The information that you’re referring to specifically is anecdotal,” he added at the time. “It was not done in a controlled clinical trial. So you really can’t make any definitive statement about it.”Trump then stepped forward to add: “We’ll see. We’re going to know soon.”The president then repeated his assessment that the drug was potentially a “game changer” and said: “We have millions of units ordered.”In May, he surprised reporters by offering that he had asked his doctor for the drug.”I asked him, ‘What do you think?’ He said, ‘Well if you’d like it.’ I said, ‘Yeah I’d like it. I’d like to take it,"” Trump claimed. “So, I’m taking the zinc and the hydroxy. And all I can tell you is, so far I seem to be okay.”On Monday, Trump and Health and Human Services Secretary Alex Azar sought to downplay the FDA’s decision to withdraw its emergency use recommendation for hydroxychloroquine.The president first punted a reporter’s question on the FDA’s action to Azar, who tried to put a positive spin on it by saying it “removes the barrier” of people thinking it could only be used in a hospital setting.“They took the emergency use authorization off. At this point it’s just like any other approved drug in the United States. They may be used in hospitals, they may be used as out-patient, at home, all subject to a doctor’s prescription,” Azar said.”In fact the FDA’s removal of the authorization takes away what has been a significant misunderstanding by many that made people think that somehow it could only be used in a hospital setting,” he added.Azar continued: “If a doctor wants to prescribe working with a patient, they may do that for any purpose they want to do. This removes the barrier.”Trump then chimed in, saying, “So, it actually uncomplicated it in a way.” Copyright © 2020, ABC Audio. All rights reserved.