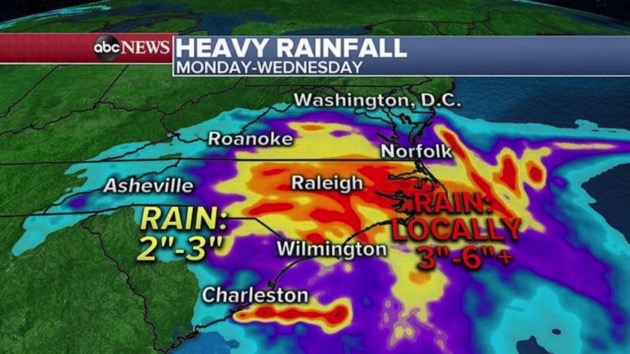 By MAX GOLEMBO, ABC News(NEW YORK) — More than two dozen wildfires are burning in the West from Montana to western Texas.Some of the bigger one include the Bighorn Fire near Tucson, Arizona which covers 13,200 acres and 22% contained with evacuations in place.Another fire in northern Arizona called the Mangum Fire is 24,000 acres and only 2% contained with no evacuations yet.In Santa Barbara County, the Drum Fire is 600 acres and only 10% contained with some evacuations yesterday which have now been lifted.Coastal California will see a break from hot and dry conditions as the marine layer sets in on Santa Barbara County.Inland areas of the West, however, are a different story. Very dry conditions with gusty winds near 40 mph are expected from eastern California to Kansas Monday.There are also nine western states that are in Red Flag Warnings Monday morning.In the East it is quite the opposite with very humid weather expected and lots of rain in the forecast.A stationary front and a low pressure with it has been nearly stationary in the Southeast bringing lots of rain to the area.The highest rainfall totals have been south of Charleston, South Carolina, where 4 to 5 inches of rain fell over the weekend.In the Tampa Bay area, some places got up to 3 inches of rain in a matter of hours and that caused flooding overnight.Over the next 48 to 72 hours, this coastal low pressure will begin to move north into North Carolina and eventually into Virginia by the middle and end of the week.Rounds of heavy rain are expected in the Carolinas this week and into Virginia and the southern Mid-Atlantic with Flash flooding expected.Copious amounts of rain is also forecast for the Carolinas and into southern Virginia this week.Locally, some areas could see more than a half a foot of rain through Wednesday where Flash flooding is forecast.