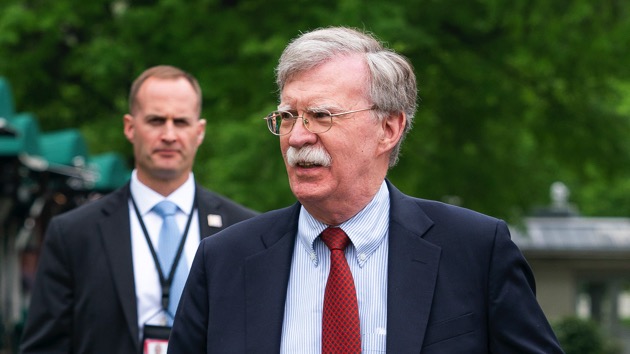 By JOHN SANTUCCI, KATHERINE FAULDERS and MIKE LEVINE, ABC News(WASHINGTON) — Just a week before the much-awaited book by President Donald Trump’s former National Security Advisor John Bolton is set to go on sale, the Trump administration is expected to file a lawsuit in federal court seeking an injunction to block the book from being released in its current form, sources familiar with the matter told ABC News.The lawsuit is expected to be filed in the coming days and could come as soon as Monday, sources said, cautioning that some details are still being worked out.Bolton, who departed the Trump administration last fall, was originally supposed to publish his book, The Room Where It Happened, earlier this year, but it was met with delays from the White House as the book went through a standard prepublication security review for classified information by the National Security Council.In a description of the coming book, Bolton’s publisher says, “What Bolton saw astonished him: a President for whom getting reelected was the only thing that mattered, even if it meant endangering or weakening the nation.”According to the description, posted online, Bolton details potentially impeachment-worthy “transgression” across “the full range” of Trump’s foreign policy.The NSC and Bolton’s team have been at odds about the information in the manuscript, according to letters exchanged between the two and provided to ABC News by Bolton’s attorney, Chuck Cooper, and the White House.The NSC claimed the book continued to contain “significant amounts” of classified information, but Bolton’s lawyer pushed back, claiming that none of it “could reasonably be considered classified.”In a Wall Street Journal op-ed last week, Cooper wrote that on June 8 White House lawyer John Eisenberg “asserted in a letter that Mr. Bolton’s manuscript contains classified information and that publishing the book would violate his nondisclosure agreements.”“This last-minute allegation came after an intensive four-month review, after weeks of silence from the White House, and — as Mr. Eisenberg admits in his letter — after press reports alerted the White House that Mr. Bolton’s book would be published on June 23,” Cooper wrote.”This is a transparent attempt to use national security as a pretext to censor Mr. Bolton, in violation of his constitutional right to speak on matters of the utmost public import,” he wrote. “This attempt will not succeed, and Mr. Bolton’s book will be published June 23.”In a related press release, the publisher said that in the weeks before Bolton’s book was printed, Bolton worked with the NSC to address NSC’s concerns, and the “final, published version of this book reflects those changes.”The White House and the Justice Department did not immediately respond to a request seeking comment for this report.This is a developing story. Check back for updates.Copyright © 2020, ABC Audio. All rights reserved.