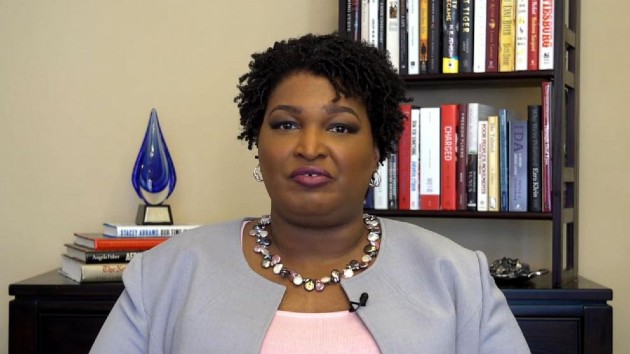 By ADAM KELSEY, ABC News(WASHINGTON) — Stacey Abrams criticized the Trump administration’s handling of race relations Sunday, saying the president, his campaign and a member of his cabinet were not “taking responsibility” for words and actions that she feels have alienated minority communities.In an interview on ABC’s This Week, Abrams was asked to respond to Housing and Urban Development Secretary Ben Carson, who told ABC News Chief Anchor George Stephanopoulos earlier on the show that the nation needs to “grow up” when it comes to the debate over the renaming of objects and institutions that offend some groups.”I think that is a fairly infantile response, actually, to say that words don’t have meanings, that dates don’t have meanings, that dates don’t have power,” Abrams said.The former Georgia House minority leader and the state’s Democratic gubernatorial candidate in 2018, went on to highlight the administration’s move Friday to rollback LGBT health care discrimination protections, noting that the action came on the fourth anniversary of the Pulse shooting that left 49 dead at an Orlando, Florida, gay nightclub. She also pointed to the Trump campaign’s delayed decision to move an Oklahoma rally to avoid conflicting with the Juneteenth anniversary of the freeing of America’s slaves and so soon after the anniversary of one of the most violent attacks on African Americans in U.S. history in Tulsa, where the rally will be held.”So let’s be very clear, this isn’t about growing up,” Abrams said. “It’s about taking responsibility and having accountability for the actions that have been taken by this country, and by people acting on behalf of this country.”Stephanopoulos went on to ask Abrams about the Friday killing of Rayshard Brooks by Atlanta police in a Wendy’s parking lot — the latest in a series of deaths of unarmed African Americans at the hands of law enforcement, caught on camera, and one that has again led to demonstrations and the destruction of property.”Activists are necessarily calling into question what’s actually being done (to reform the actions of police),” Abrams responded. “And what I would say is that there is a legitimacy to this anger, there is a legitimacy to this outrage. A man was murdered because he was asleep in a drive-thru. And we know that this is not an isolated occurrence.”On that subject, Stephanopoulos pressed Abrams on her interpretation of the “defund the police” movement, which has divided liberal activists who take the slogan literally, and those who believe efforts should instead be focused on a broader push to reform law enforcement.”Joe Biden said he is against defunding the police, but of course is for investing more in social services and other programs,” Stephanopoulos said. “What does defunding the police mean to you, and is it necessary?””I think we’re being drawn into this false choice idea. The reality is, we need two things: We need reformation of how police officers do their job, how law enforcement does its job,” Abrams said. “But I also know that we have to have a transformation of how we view the role of law enforcement, how we view the construct of public safety, and how we invest, not only in the work that we need them to do to protect us, but the work we need to protect and build our communities.”