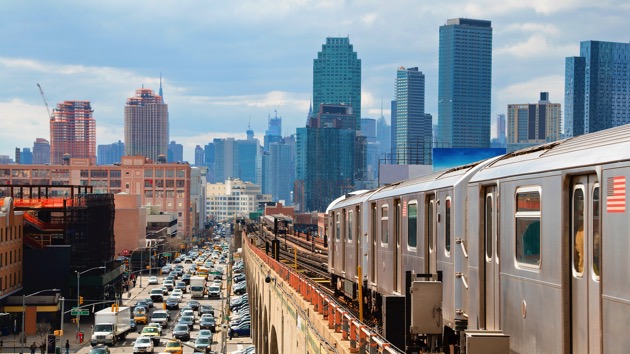 By GIO BENITEZ and MINA KAJI, ABC News(NEW YORK) — As states start to ease restrictions, the man who coined the term “gridlock” is warning that drivers could face an unprecedented level of traffic if people avoid mass transit due to COVID-19 concerns.”You’re gonna have people in cars that were previous transit users,” Sam Schwartz, traffic consultant and former New York City traffic commissioner, told ABC News. “It could be 10, 20, 30% higher than what we’ve seen. Traffic could come to a standstill.”Schwartz says that the rush-hour commute in some cities could triple in length — a two-hour period could become a four- to six-hour ordeal.”Let’s say it’s from 8 a.m. to 10 a.m. or 7 a.m. to 9 a.m.,” Schwartz said. “It may now be from 6 a.m. to 11 a.m.”Schwartz believes cities will be forced to implement a number of strategies to combat the increase in road traffic such as staggered work hours.In New York City, subway ridership is currently down over 80% compared to last year, according to the MTA.Schwartz said traffic data from the Long Island Expressway shows that cars are traveling faster than 50 miles per hour, but by Labor Day, he believes every inch of it could be packed with slow-moving traffic.Nationally, traffic has risen to 88% below pre-COVID levels, with a low of 52% during the first week of April, according to traffic analytics company INRIX.This might increase even further in the summer, according to a new survey commissioned by the Out of Home Advertising Association of America (OAAA), which showed that 62% of summer vacationers are planning to travel by car — an increase of 72% from last year.”This survey confirms what we’ve all suspected — that consumers around the country are eager to get out of their homes in a safe way and travel this summer, primarily via the sanctuary of the car,” OAAA President and CEO Anna Bager said in a release. “With restrictions easing, people are craving the open road especially to see family and friends.”Experts expect this to translate to an increase in car sales.Jessica Caldwell, executive director of insights at Edmunds, explained that she keeps hearing from car buyers that they “are just a bit cautious about not only mass transit, but also just transporting themselves to go to Costco, to go to the grocery store.”The Centers for Disease Control and Prevention (CDC) recommends people who choose to take mass transit wear a cloth face covering, practice social distancing, good hand hygiene and avoid touching surfaces.Copyright © 2020, ABC Audio. All rights reserved.