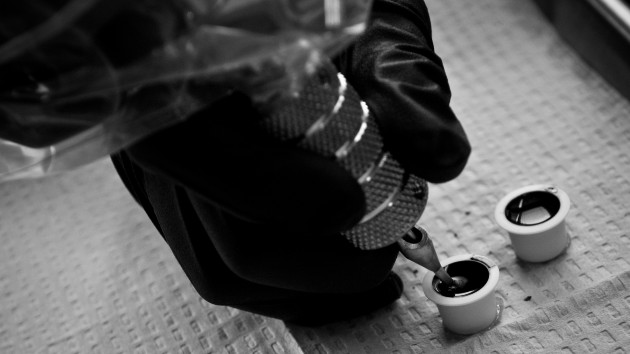 By MORGAN WINSOR, ABC News(MURRAY, Ky.) — A tattoo parlor in southern Kentucky is offering to cover up racist and gang-related ink without charge.The Gallery X Art Collective in the city of Murray, just north of Kentucky’s border with Tennessee, announced the opportunity on its Facebook page last week amid anti-racism protests nationwide. “Gallery X Art Collective would like to extend the offer to change your future in becoming a better person,” the family-owned business wrote in a Facebook post. “If it is hate-related, in any way, we will schedule you a day to come get it cover (sic) up for free, at the artists (sic) choosing.”The shop noted that the client will have numerous designs to choose from and there will be some space for ideas, but the final ink will be up to the tattoo artist.”We have plenty of predawn designs and flash books,” the business wrote in the Facebook post, “so if you feel it’s time to change your hate, or have been reformed but been too broke to cover your mistake of a tattoo, come see me you’ll get a class tattoo for free that can start your path to being the person you were meant to be.”More than 500 people have reached out to the Gallery X Art Collective in just the past two days regarding the offer, according to owner Jay Harvill. “The response has been a little overwhelming for the artist,” Harvill told ABC News on Monday. “They are reviewing each one and they really want to help everyone that truly wants to cover up and right the wrongs from past mistakes.” Harvill said his tattoo artists have “huge hearts” and they want the studio “to be a safe, judgement-free environment for everyone.” “My artist feels that offering this service is the best way they can help and give back to our community,” he added. “To help spread the messages of positivity, equality and to just love each other.”Tens of thousands of people have taken part in Black Lives Matter demonstrations across the United States and around the world in recent weeks, calling for police reform and an end to racial injustice. The protests were sparked by the May 25 death of George Floyd, an unarmed 46-year-old black man who died in Minneapolis shortly after a white police officer was filmed kneeling on his neck as three other officers stood by.The Minneapolis Police Department fired all four officers after video of the incident surfaced.The officer who prosecutors say pinned Floyd down for nearly nine minutes, Derek Chauvin, has since been charged with second-degree murder and second-degree manslaughter. The three other officers each have been charged with second-degree aiding and abetting felony murder as well as second-degree aiding and abetting manslaughter. Copyright © 2020, ABC Audio. All rights reserved.

One of the five people shot on Bourbon Street in New Orleans is an alleged gunman: Chief
Mollie Tibbetts’ convicted killer loses bid for new trial
Ryan Reynolds unveils his CG-buff self as DUDE in ‘Free Guy’ teaser
Some Democrats call on McCarthy to resign after comment ‘hard not to hit’ Pelosi with speaker’s gavel
Obama to host hundreds at 60th birthday party amid COVID concerns
Kit Harington talks rehab post-‘Game of Thrones’, and how fatherhood strengthened his marriage to wife Rose Leslie