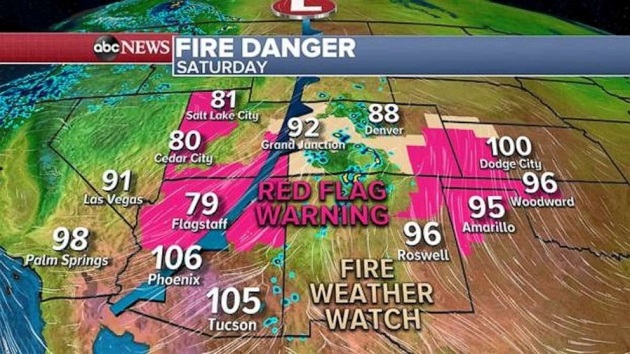 (NEW YORK) — Critical fire danger, driven by the combination of strong winds, hot temperatures, and dry vegetation will persist this weekend in parts of the western U.S.In Arizona, the Bighorn Fire in the Coronado National Forest grew to at least 8,950 acres on Friday with 10% containment. There were a couple of other smaller fires reported on Friday in Southern California and Colorado.Relative humidity values will likely fall as low as 5% in the region Saturday afternoon. Winds gust in parts of northern Arizona could reach 50 mph, especially near Flagstaff. Additionally, blowing dust will be an issue in that region as well.Some dry thunderstorms will also be possible along the borders of New Mexico and Colorado, as well as Utah Saturday. This could mean chances for lightning, which could spark other fires.Other parts of the region will be quite hot Saturday, with temperatures in the triple digits expected for the southern half of Arizona.The fire weather threat will persist for parts of the region again on Sunday before conditions improve next week.Meanwhile on the East Coast, a combination of a couple of different weather systems will bring a lingering flood threat through the upcoming week.A flash flood watch has been issued for parts of Florida and Georgia Saturday. Thunderstorms with heavy rain are currently affecting parts of the Southeast, from Tampa, to the North Carolina and Virginia border.The storms are firing up along the stalled frontal boundary that is hugging the immediate Southeast coastline. The stationary front will not move much this weekend, and therefore storms will continue to develop in this region, and will bring rounds of heavy rain that could cause some flooding.A new low pressure will develop in the Appalachians on Sunday and bring heavy rainfall to parts of West Virginia, Virginia and Ohio.Rounds of unsettled weather, with gusty thunderstorms and heavy rain are in the forecast, where rainfall could be locally enhanced along the North and South Carolina coastline. Rounds of heavy rain will also be possible in the Appalachians from West Virginia to South Carolina.Current forecasts are showing over 6 inches of rain will be possible in parts of the Carolinas through the middle of the week, which could result in flash flooding.Copyright © 2020, ABC Audio. All rights reserved.

Gun violence in America: Newark
Women lawmakers introduce bill to require statues of Ruth Bader Ginsburg, Sandra Day O’Connor at Capitol
Jay Pharoah and Sinqua Walls joke about their hostility toward Nick Cannon for his role in ‘Love Don’t Cost a Thing’
US soccer team wins nail-biter against Netherlands with penalty kicks in Olympics quarterfinal
Ben Stiller hit with backlash over nepotism in Hollywood debate
Check out Adam Driver, Lady Gaga and Jared Leto in the trailer for Ridley Scott’s ‘House of Gucci’