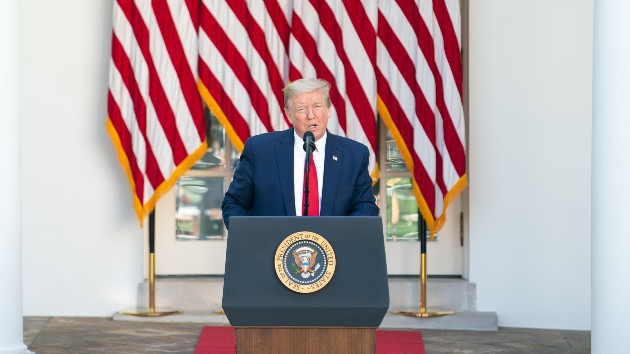 By WILL STEAKIN and KENDALL KARSON, ABC News(WASHINGTON) — The Republican National Committee announced it has selected Jacksonville, Florida, to host President Donald Trump’s acceptance speech for the Republican nomination, after a standoff with North Carolina’s Democratic governor over restrictions to safely host a large-scale event in the midst of the coronavirus pandemic.While the convention business, rules and platform voting, will still be held in Charlotte, North Carolina, from Aug. 24-27, the president’s acceptance speech will now be held on Aug. 27 at the VyStar Veterans Memorial Arena in Jacksonville, which holds 15,000 people.”We are thrilled to celebrate this momentous occasion in the great city of Jacksonville,” said RNC Chairwoman Ronna McDaniel. “Not only does Florida hold a special place in President Trump’s heart as his home state, but it is crucial in the path to victory in 2020. We look forward to bringing this great celebration and economic boon to the Sunshine State in just a few short months.”That announcement made sure not to say that the convention has been moved from North Carolina to Florida, but that the “celebration” would be taking place in the Sunshine State.The RNC executive committee unanimously voted Wednesday night to approve a significantly pared down convention in Charlotte, North Carolina, in which only official business will be held.”The RNC’s Executive Committee has unanimously approved procedures that allow for official convention business to continue in Charlotte,” an RNC spokesperson told ABC News.A total of about 336 delegates are expected to appear in Charlotte, according to the new procedures approved Wednesday night, and for those delegates not present, they can designate one of the delegates present as a proxy to cast their vote for the nominations.There won’t be a platform committee at the 2020 convention, instead the executive committee opted to keep the 2016 platform in place through 2024 with no changes.The unprecedented move to change the location of the president’s acceptance speech comes just two months out, and presents Republicans with the tall task of having to shift years worth of work and investment.Charlotte and the RNC are locked in a contract that was signed more than two years ago, requiring the convention to be held there.Republicans made the significant announcement after a standoff with North Carolina Gov. Roy Cooper over restrictions to safely host a large-scale event in the midst of the coronavirus pandemic.Trump tweeted last week that due to the escalating feud with Cooper, “We are now forced to seek another State to host the 2020 Republican National Convention.”A RNC official further clarified Trump’s abrupt announcement, saying that the “celebration of the president’s acceptance of the Republican nomination” will be in another city. But the official added, “should the governor allow more than 10 people in a room, we still hope to conduct the official business of the convention in Charlotte.”Trump laid blame for the sudden change of plans squarely on Cooper, but the governor has maintained that he is prioritizing public health over politics.”It’s unfortunate they never agreed to scale down and make changes to keep people safe. Protecting public health and safety during this pandemic is a priority,” Cooper responded in his own tweet.Discussions between aides to Cooper and the RNC broke down after a conversation between Cooper, Trump, McDaniel, and Marcia Lee Kelly, the president and CEO of the convention, in which Republicans wanted a guarantee of a “full arena.” Cooper, who is contending with rising coronavirus cases in his state, said on Tuesday that would be “very unlikely.””Neither public health officials nor I will risk the health and safety of North Carolinians by providing the guarantee you seek,” he wrote.After Cooper’s latest exchange, top Republicans assured that their preference was to keep the quadrennial event in Charlotte, at least only part of it.”We hope to still conduct the business of our convention in Charlotte, but we have an obligation to our delegates and nominee to begin visiting the the multiple cities and states who have reached out in recent days about hosting an historic event to show that America is open for business,” McDaniel said.As the Washington Post first reported, Trump’s acceptance speech in Jacksonville will take place while marking the 60th anniversary of “Ax Handle Saturday,” when more than 200 white people, wielding baseball bats and ax handles, chased and beat civil rights protesters in the Florida city. The protesters were participating in peaceful lunch counter demonstrations when they were attacked, as white police officers first stood by, then joined in, during the beatings. The bloody day, on Aug. 27, 1960, was organized by members of the Ku Klux Klan. Copyright © 2020, ABC Audio. All rights reserved.

Jill Biden cheers on Team USA as Olympic Games get underway in Tokyo, Japan
One dead, six injured after boats collide on Georgia lake
Washington state deputy shot and killed in the line of duty
What to expect as surfing makes Olympics debut
What to know about antibody tests in a post-vaccine world
Missouri county’s order reinstating mask mandate amid delta surge met with challenges