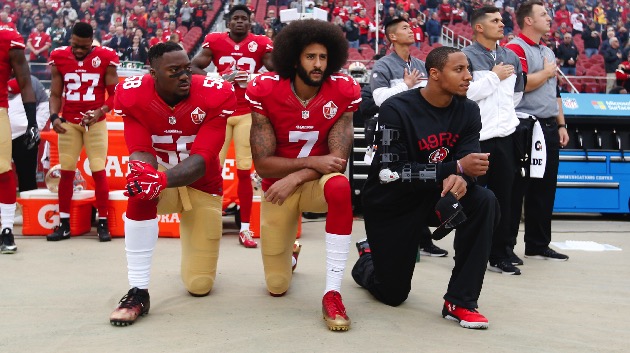 By JOANNE ROSA, ABC News(NEW YORK) — Director Spike Lee criticized NFL commissioner Roger Goodell’s apology to players about racism, after he did not specifically name former San Francisco 49ers quarterback Colin Kaepernick.In response to the unrest and protests following the death in police custody of George Floyd — a black man who died on Memorial Day after he was pinned down by a white Minnesota police officer — Goodell issued a video statement on Friday, June 5, apologizing for “not listening” to players about racism.”We, the National Football League, condemn racism and the systematic oppression of black people. We, the National Football League, admit we were wrong for not listening to NFL players earlier and encourage all to speak out and peacefully protest,” Goodell said in a video posted on the NFL’s Twitter page. “We, the National Football League, believe black lives matter. I personally protest with you and want to be part of the much-needed change in this country.”Lee, an Oscar-winning director who’s been portraying the black experience in his films for over 40 years, called Goodell’s statement “weak” on The View Friday.”Mr. Roger Goodell, the commissioner of the ‘No Freedom League,’ that apology was weak. It was piss poor and plain bogus,” Lee said.Kaepernick was the first NFL player to take a knee on the football field during the playing of the national anthem, in August 2016, to protest police brutality. Ultimately, his actions sparked a movement against racism, and while he had many supporters, he also had many opponents.Kaepernick hasn’t been with an NFL team since he severed his contract with the 49ers in March 2017.Lee questioned how Goodell could apologize for the NFL’s “misguided acts” without referencing the former 49ers quarterback, calling it “a point blank punk move.””I mean every word I said. It was a punk move,” he added.As protests across the globe continue over the death of Floyd, Lee has showed his support for the cause and joined marches in New York City.”Those last eight horrific minutes of our brother’s life, where he’s calling out to his mother, calling out ‘I can’t breathe,’ echoing what we heard from Eric Garner, those images went around the world,” Lee said. “That is why people have taken to the streets around the world.”Amongst growing concerns and demands for police reform in the United States, Lee accused President Donald Trump of “trying to change the narrative” of the “defund the police” movement and “make people think that defund the police means we don’t need the police at all.””Words are important and [people] use the semantics to get the message twisted,” Lee said, adding that Trump also warped Kaepernick’s message behind kneeling on the field in 2016.Copyright © 2020, ABC Audio. All rights reserved.