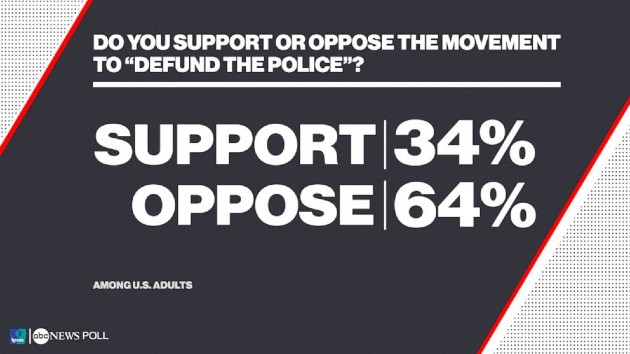 (NEW YORK) — Strong majorities of Americans oppose the movement to “defund the police” and some of its most significant goals, specifically reshuffling funding away from law enforcement to support mental health, housing and education programs, a new ABC News/Ipsos poll released Friday finds.Nearly two-thirds of Americans oppose calls for defunding police departments, compared to 34% who back the movement, and 60% specifically oppose reducing the budget for police to reallocate it to other public health and social programs, while 39% support that move.But black Americans land differently on the issue, though not overwhelmingly so.A majority of black Americans support the movement to “defund the police” (57%) and putting the money towards other community programs (64%), a departure from the other groups. Support among blacks for the “defund the police” movement is more than double that of whites (26%), and black Americans are nearly twice as likely as whites (33%) to back key tenets of the movement. An equal 42% of Hispanics support both.In the poll, which was conducted by Ipsos in partnership with ABC News using Ipsos’ Knowledge Panel, nearly three in four white Americans and 57% of Hispanics are against defunding the police, and two-thirds of whites and 58% of Hispanics oppose moving budgets elsewhere.Similar to black Americans, Democrats stand as the lone faction among the political tribes that approve by a majority of defunding the police (55%) and redirecting it to mental health, housing and education programs (59%).But Democrats are more divided in their support than Republicans and Independents are in their opposition, with 43% and 41% of Democrats opposing both defunding the police, and using the money for other purposes, respectively.Republicans, on the other hand, almost uniformly disapprove of defunding the police (89%) and redistributing money (86%). Independents largely fall along similar lines as Americans, with 67% opposing defunding the police and 59% being against stripping funding from police departments to boost community-based support programs.While calls for overhauling police departments are not new, the demand to defund is currently a prominent message for thousands of protesters demonstrating in the wake of the death of George Floyd, a black man, at the hands of a white police officer. After Floyd’s death, and the killings of Breonna Taylor and Ahmaud Arbery, demonstrators in the streets are urging for significant reform.Despite some cities moving to implement changes, including Minneapolis voting to disband the city’s force, national leaders are reticent to back such a bold change.Presumptive Democratic nominee Joe Biden, walking a fine line this week between listening to the demands of protesters without alienating the men and women in blue, voiced, for the first time, his dissent, telling CBS News, “I don’t support defunding the police. I support conditioning federal aid to police based on whether or not they meet certain basic standards of decency and honorableness. And, in fact, are able to demonstrate they can protect the community and everybody in the community.”Amid the country’s reckoning over racial injustice, on the other crisis gripping the nation, Americans appear slightly less uneasy about the coronavirus, and more willing to get back to the activities they did before.There is a nearly 10 percentage point decrease in concern among Americans from three weeks ago, with 69% of Americans still concerned about contracting the virus, compared to 78% who said the same in mid-May.Just under a third of Americans are not concerned about becoming infected with COVID-19, up from 22% in that May poll.The slight decline in concern is accompanied by more of a willingness among Americans to return to normal activities, following a month of reopening across all 50 states.At the same time, the country marked another grim milestone this week, hitting two million confirmed cases of the virus. At least eight states across the country — Arizona, Arkansas, Mississippi, North Carolina, South Carolina, Tennessee, Texas and Utah — are experiencing an increase in coronavirus-related hospitalizations since May 25, according to an ABC News analysis.Still, majorities of Americans are now ready to eat at a restaurant (59%), stay in a hotel (57%), attend church (57%), go to a shopping mall (53%), and send their child to school (54%).Back in May, less than half of Americans wanted to eat at a restaurant (41%), stay in a hotel (45%), attend church (42%), go shopping (38%), and send their child to school (31%). The biggest mover across all the activities was in willingness to send their child to school.Less of the country is willing to go to a bar (34%), attend a sporting event (29%), go to the gym (33%), fly on an airplane (44%), go to the movies (39%) or go bowling (38%). But those numbers ticked up from last month, when there was less willingness to go to a bar (24%), go to a sporting event (19%), go to the gym (27%), fly on an airplane (29%), go to the movies (29%) and go bowling (28%).Overwhelming majorities are still willing to go grocery shopping (94%), get a haircut (69%) and go to work (82%).In June, despite the nationwide protests taking place in dozens of cities, only 26% of Americans said they are willing to attend a protest.This ABC News/Ipsos poll was conducted by Ipsos Public Affairs‘ KnowledgePanel® June 10-11, 2020, in English and Spanish, among a random national sample of 686 adults, with oversamples of black and Hispanic respondents. Results have a margin of sampling error of 4.2 points, including the design effect. See the poll’s topline results and details on the methodology here.Copyright © 2020, ABC Audio. All rights reserved.