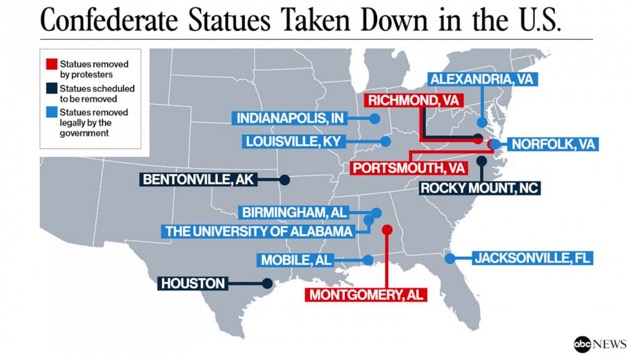 By IVAN PEREIRA, ABC News(NEW YORK) — Across the country, local and state leaders have been listening to protester’s calls to reexamine their controversial relics of the past and current policies on policing.In the last two weeks, locations such as Richmond, Virginia, Jacksonville, Florida and Indianapolis, Indiana, have quickly moved to remove Confederate statues and memorials from public places as demonstrators reignited arguments about the pain the statues have caused. Historians and civil rights groups have long said these statues were put in place to emphasize white supremacy over black people during the late 19th century.After the weeks of protests from residents following George Floyd’s death, leaders have rethought their stances on the statues and approving their removals.As of Friday morning, at least seven cities have either removed or approved the removal of Confederate monuments. The most controversial of those memorials, the Robert E. Lee statue in Richmond, Virginia, is caught up in a legal battle.Corporations and other organizations have also announced they were removing Confederate related items. The University of Alabama said it would remove three Confederate plaques from its campus and create a committee to review buildings that bear the names of Confederate members.In some cities, protesters have taken matters into their own hands. People have toppled and defaced Confederate statues in Virginia and Alabama during the protests following the death of George Floyd in police custody.Some protesters have also taken down and defaced statues of Christopher Columbus and other figures linked to colonialism, slavery and racial violence and disparity in their cities.At the same time, police offices and cities have worked to increase transparency between law enforcement and prohibit excessive force.Minneapolis’s city council said it has enough votes to disband its police force, despite opposition from its mayor, and New York’s State Legislature approved a bill that would repeal a measure that prevented disclosure of information on officers who were disciplined.Activists predict that more cities and police forces will enact reforms in response to Floyd’s death.Copyright © 2020, ABC Audio. All rights reserved.

Air pollution remained higher in minority communities during the pandemic, revealing persistent health disparities
Woman and her dog are fatally stabbed in Atlanta park, FBI investigating
Why women have an ‘orgasm gap’ and 5 myths debunked
American Caeleb Dressel sets world record in 2nd individual win at Olympics
US swimmer voices concerns about doping in Olympic Games
These dating US track athletes are taking their love to the Tokyo Olympics