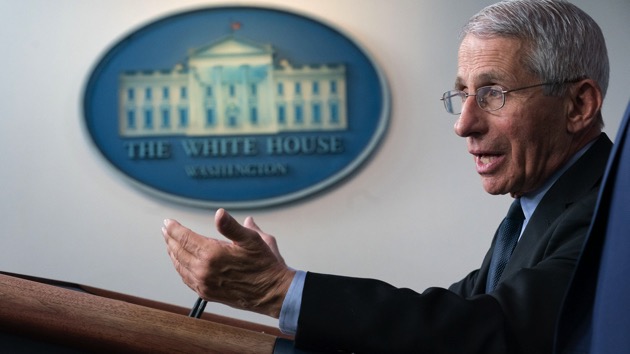 (WASHINGTON) — Anthony Fauci, the nation’s top infectious disease expert, said Friday that his advice for people who want to attend President Donald Trump’s campaign rallies is the same for anti-Trump protestors — any large group is “a danger” and “risky.” And if a person insists on going, they should wear a mask, especially when they are yelling or chanting, he said.

In an interview with ABC News Chief White House Correspondent Jonathan Karl on “Powerhouse Politics” podcast, Fauci said he understands the urge people have to participate in the political process. But he also said the safest bet is to avoid congregating in large groups.

When asked whether his advice also applies to Trump’s plans to resume campaign rallies next week, Fauci said yes: “I am consistent. I stick by what I say.”

The “best way that you can avoid — either acquiring or transmitting infection — is to avoid crowded places, to wear a mask whenever you’re outside. And if you can do both, avoid the congregation of people and do the mask, that’s great,” he said.

“If you’re going to be in a situation where — beyond your control there’s a lot of people around you — make sure you wear a mask,” he said.

Fauci’s comments come as the Trump campaign plans a massive rally in Tulsa, Oklahoma, next Friday. The arena holds some 19,000 people, and officials were discussing ways to try to mitigate the spread of the virus such as providing hand sanitizer and masks to attendees.

Fauci, the director of the National Institute of Allergy and Infectious Diseases, has been the leading scientific voice on COVID-19. His frank commentary — this week he told biotech executives the highly contagious respiratory infection was his “worst nightmare” — has often clashed with Trump and GOP supporters, who are pressing the country to reopen in a bid to restart the economy.

In recent weeks, the White House task force focused on coronavirus has faded in prominence. Fauci, who continues to give media interviews, told ABC’s Karl he hadn’t met with the president since last week but that the health officials remain in constant contact.

“We have not thrown in the towel,” he said.

Novel coronavirus cases in the U.S. have topped 2 million with 113,899 deaths, according to a recent count Friday afternoon by Johns Hopkins University.

A vaccine isn’t expected until 2021 and there’s only one drug — remdesivir — that has shown modest improvements in patients.

On the prospects of a vaccine, Fauci said he expects a safe one will be identified by the end of the year and that he has more confidence in a vaccine approved by U.S. or European authorities than by China.

Fauci said he urges Americans not to take an either-or approach – being completely locked inside versus flouting masks and social distancing. He said there’s a way to take common-sense steps to be safe, namely just avoiding crowds and wearing a mask.

“My message is for people to please hang in there. We will get through this. This will end. It will end with a combination of public health measures and ultimately science coming in and getting durable solutions such as treatments and vaccines,” Fauci said.

An increase in hospitalizations across several states in recent days has been attributed to several factors, including the reopening of the economy, a disregard for social distancing guidelines, as well as Memorial Day weekend, on which many Americans flocked to crowded bars and packed pool parties that health officials warned against.

Fauci said it’s a matter of time before the impact of the recent protests and Trump’s upcoming political rally will be seen in terms of infections.

“Whenever you loosen mitigation, you can expect you’ll see new infections. I think it would be unrealistic to think that you won’t,” he told Karl.

“The critical issue is how do you prevent those new infections that you see from all of a sudden emerging into something that is a spike? And that’s the thing that we hope we’ll be able to contain. But time is going to tell in the next few weeks,” he added.

As for people insistent on ensuring their rally cries are heard by the government, Fauci pleaded with them to keep the mask up and covering their nose and mouth.

Trump’s rally — scheduled on Juneteenth, a celebration of the end of slavery, in a city known for the 1921 Black Wall Street Massacre — could draw anti-Trump protesters as well as supporters. Fauci said he hopes people who insist on attending keep their masks on.

“When you start to chant and shout, even though the instinct is to pull the mask down, which you see, don’t do that because there is a risk there and it’s a real risk,” he said.

Is delta more dangerous for children? Pediatrician answers top back-to-school questions
More businesses are mandating COVID-19 vaccines. Is that legal?
Fauci: If community spread doesn’t get under control, US ‘may sooner or later get another variant’
What is a HIPAA violation?
Chris Evans responds to Lizzo’s joke that she’s pregnant with his baby
Boeing’s Starliner spacecraft is back: How to watch Tuesday’s launch