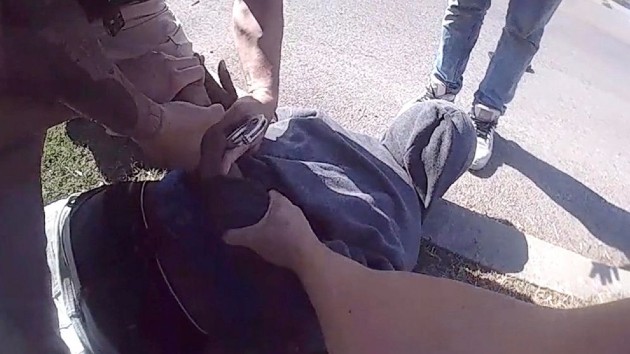 By MEREDITH DELISO and MARCUS MOORE, ABC News(TULSA, Okla.) — A Tulsa, Oklahoma family is calling for charges to be dropped after a teen was arrested for jaywalking last week.Tulsa police this week released body-camera footage of the June 4 incident, which shows officers detaining two teens.”These young men are just walking. Minding their own business,” Damario Solomon-Simmons, the lawyer for the arrested teen, told ABC News’ Marcus Moore Thursday. “That’s it. That’s it.”In the blurred footage, the teens, who Solomon-Simmons said are cousins, can be seen walking in the middle of a quiet street when two officers get out of separate cars and approach them.When one of the teens asks why the officers were following them, an officer replies, “Because you were jaywalking, you broke the law, that’s why.”One of the teens is then handcuffed while on his stomach.”You guys harassing us for no reason, sir. We’re just walking, man,” the second teen says before he is also handcuffed.As one of the officers struggles to put the first teen in the squad car, the teen yells, “Call my momma!” He appears to spit, calls the officer racist and says he was punched. The officer tells the teen, “Do not headbutt me again,” then asks the other officer to “request a cage.”The first teen is placed in the caged squad car, while the second teen is released, before the 20-minute footage ends.Tulsa police said the arrest is under investigation by its Internal Affairs Unit and the department can’t comment at this time. They released the two body-camera videos in the interests of transparency, police said.Solomon-Simmons said the arrest was illegal, and that the teens were walking in an area that doesn’t have a sidewalk.He said the arrested teen is 13 and that police allegedly kicked, punched and slammed him against the door.”That is disheartening, particularly this time where police violence and brutality is everywhere,” said Solomon-Simmons, adding that the teen was afraid. “He’s seeing what happened to George Floyd. He doesn’t know what’s going to happen to him.”The death of George Floyd at the hands of four Minneapolis police officers has touched off weeks of protests across the country.The mom of the arrested teen told Moore she was shocked by the footage.”I couldn’t believe it. I was hurt,” Tawanna Adkins said. “Why would they do him like that?”Charges against the teen include jaywalking, assault and battery of a police officer, and resisting arrest, according to Solomon-Simmons. He is calling for the charges, the latter two of which are felonies, to be dropped.The names of the officers have not been released.Tulsa Mayor G. T. Bynum responded to the incident on Facebook following the release of the footage.”I want every kid in Tulsa to feel safe to walk down the street in their neighborhood,” he wrote on Wednesday. “No Tulsa kid should have to fear being tackled and cuffed for walking down the street. I viewed that footage last night more as a parent than a mayor.”Bynum added that he is working with the police chief to review the way that particular police unit, which he said focuses on removing illegal guns from the streets, “goes about its work in general.””[The] goal of that work should be that families feel safe in their neighborhood. This instance accomplished the opposite,” he wrote.