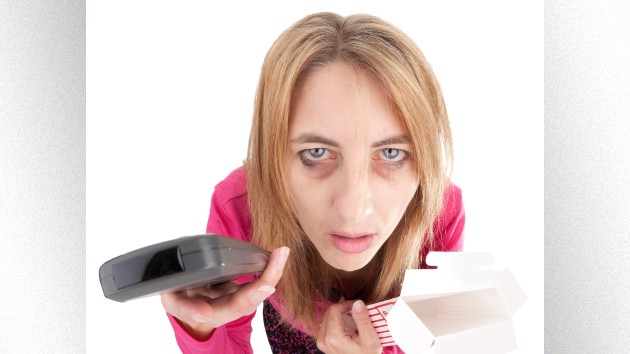 (LOS ANGELES) — Remember the Disney/Pixar movie WALL-E, which pictured the humans of the future as stubby, atrophied blobs addicted to their screens?

That’s not too far from reality, according to researchers who have created two “models” that could reflect all the negative effects of 20 years spent addicted to streaming.

Granted, this isn’t exactly a scientific study — it was commissioned by the website OnlineGambling.com — but its researchers warn people against becoming the living embodiment of their male and female avatars, dubbed Eric and Hanna.

“From obesity and posture damage to premature ageing and bloodshot eyes, these are just some of the nasty effects they gathered through their research,” researchers told the Mirror of the models, which reflect a worst case scenario of years spent streaming.

The researchers explained: “Sitting for too long puts persistent pressure on the pelvic region, which damages your glutes — causing backache, and pain in the hip region and ankles.”

So after that next episode of whatever you’re watching, how about getting some fresh air?

Harris invites all female US senators to have dinner at Naval Observatory
Senate confirms Ketanji Brown Jackson to 2nd highest court in US
Texas residents asked to conserve energy by ERCOT amid heat wave
1965 California plane crash may be solved after underwater researchers discover debris
Novavax COVID-19 vaccine: How it works and other things you should know
“There is no justification for my behavior” — Chrissy Teigen apologizes to her “targets” of cyberbullying