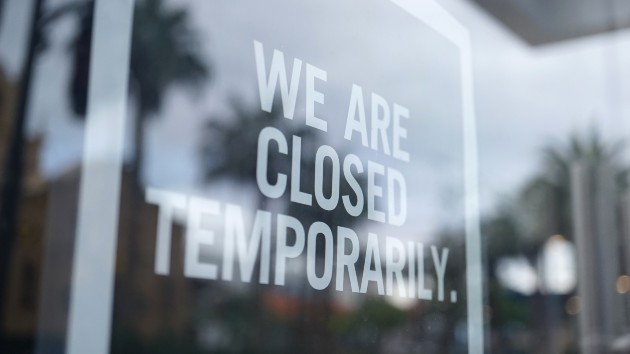 By SARAH KOLINOVSKY, ABC News(NEW YORK) — Treasury Secretary Steven Mnuchin said on Wednesday that he feels another economic relief package will be necessary to help pull the U.S. economy out of a recession in the wake of coronavirus-related shutdowns.”I definitely think we are going to need another bipartisan legislation to put more money into the economy,” Mnuchin said at a Senate Small Business Committee oversight hearing.But as lawmakers and Trump administration officials discuss what additional steps are necessary to soften the economic disruption, billions of dollars previously allocated to help small business owners remain available through the cornerstone program of the economic stimulus effort, the Paycheck Protection Program. Demand for the funds has slowed dramatically.And even with funding readily available, some businesses, especially minority- and women-owned businesses, face persistent difficulties in obtaining it.”90% of minority- and women-owned businesses, small businesses, did not get access to the PPP,” Sen. Kamala Harris, D.-Calif., told ABC News Chief Anchor George Stephanopoulous on Good Morning America Tuesday.With many businesses still shuttered or operating in reduced capacities, why aren’t owners seeing more of the money? And what roadblocks remain for owners who want to funds?

PPP: There’s still money leftInitially, Congress and President Donald Trump approved roughly $349 billion for small businesses struggling because of COVID-19. The program offered businesses with fewer than 500 employees a loan that would be converted into a grant if the money primarily went toward payroll and the businesses met other criteria. The program proved immensely popular, and the first round of funding ran dry in just 13 days.PPP got a $320 billion replenishment on April 24, when Trump signed a second bill into law. That money became available on April 27, and 43 days later, about $130 billion remains available. The overwhelming demand for the first round of funding has all but dried up.One contributing factor was backlash against large companies like Shake Shack and Ruth’s Chris Steak House, which were technically eligible to apply for and receive large loans when the program first launched, but eventually returned the money after public outcry. Mnuchin ultimately urged publicly traded companies to return any loans, saying they had access to other capital and could not demonstrate need in the spirit of the law.As the returned money was added back to available funds, owners of smaller business began to worry that their loans wouldn’t be forgiven. The law initially required owners to hire back 75% of employees within eight weeks of receiving the loan, a requirement that proved unfeasible as the lockdown dragged on. Business owners also awaited other forgiveness guidelines that the Small Business Administration was slow to roll out, raising concerns owners would be asked to pay back loans they couldn’t afford.After weeks of anxiety, Congress passed an extension for PPP recipients, giving businesses 24 weeks to hire back 60% of employees. Mnuchin further clarified Wednesday that even businesses that can’t meet the 60% payroll threshold can have a portion of their loan forgiven, proportionate to the amount used for payroll.

Difficulties for minority- and women-owned businessesEven with relaxed guidelines, some minority-owned businesses still are at a disadvantage when it comes to accessing the funds.The 90% figure cited by Harris comes from the Center for Responsible Lending, a nonprofit that works to stamp out predatory lending.”Based on how the program is structured, we estimate that upwards of 90% of businesses owned by people of color have been, or will likely be, shut out of the Paycheck Protection Program,” Ashley Harrington, CRL’s director of federal advocacy and senior council, told CBS News in an interview.While the program is ongoing, it remains unclear exactly how many minority-owned businesses are still having difficulty accessing the funds. There are many documented reasons why the disparity exists.The documentation required from small businesses to receive forgiveness is complicated, which means small businesses that don’t have access to an accountant, a lawyer or other compliance staff face additional challenges. Lawmakers on Capitol Hill on Wednesday urged Mnuchin to simplify the necessary paperwork for forgiveness.Existing banking relationships play a major role in how likely a business is to apply for, and have success in obtaining, a loan. Many of the smallest businesses have never sought a line of credit and have no relationship with a lender. According to a 2020 Federal Reserve report, 46% of white-owned businesses have obtained loans in the past, while just 23% of black-owned firms have done so.Large banks, like Bank of America, initially prioritized customers with existing lending relationships, forcing the smallest businesses with no credit relationship to wait longer without access to funds.The program excludes business owners with felony convictions, as well as those currently facing criminal charges. Mnuchin expressed openness to relaxing this guideline to exclude only those with convictions in the past three years, although he has not released formal guidance yet.The Small Business Administration’s Inspector General reviewed PPP at the request of Congress and found it did not prioritize socially or economically disadvantaged businesses, writing: “Because SBA did not provide guidance to lenders about prioritizing borrowers in underserved and rural markets, these borrowers, including rural, minority and women-owned businesses may not have received the loans as intended.”

The report also criticizes the SBA for not requiring applicants to provide demographic information, which could have made it easier to track and avoid any racial, gender or geographic disparity.Initially, PPP applications were only available in English. Now, applications and information are available in 17 additional languages.

Government efforts to help minority-owned businessesThe second round of PPP included provisions that set aside money for certain types of banks and financial institutions, in an effort to ensure money was directed toward minority-owned businesses and businesses in underserved communities.Thirty billion dollars was earmarked for either community development financial institutions, aka CDFIs, which are lenders that focus on helping low-income, disadvantaged entrepreneurs, or banks with less than $10 billion in assets. Another $30 billion was set aside for banks with assets between $10 billion and $50 billion.As interest in PPP loans dried up, the SBA and Treasury announced they would set aside an additional $10 billion for CDFIs, which often help business owners who have never sought out credit before navigate the process.One sign that the the effort might be working is the fact that the average loan size has dropped from about $206,000 during the first round to $113,000 as of June 8, possibly meaning a larger number of smaller businesses are getting access to capital in this crucial time. Copyright © 2020, ABC Audio. All rights reserved.

From counterculture to competition, skateboarding makes its way to Olympics
COVID-19 vaccinations up 14% in past week, White House says
New legislation would require women, like men, to sign up for potential draft
Maryland wildlife refuge fights to protect American history from climate change
Nathan Fillion gives new meaning to “arms control” as TDK in new clip from ‘The Suicide Squad’
Paralyzed man uses exoskeleton suit to get down on knee to propose to girlfriend