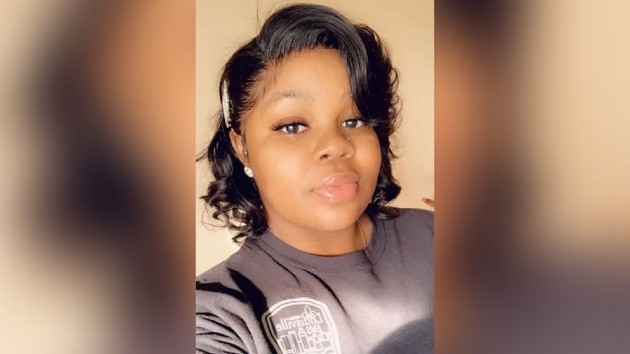 (LOUISVILLE, Ky.) — The detective who applied for the no-knock warrant that resulted in the police death of Breonna Taylor has now been reassigned, authorities said. Taylor, a 26-year-old black woman, was shot by Louisville, Kentucky, police who executed a “no-knock” warrant while she slept in her home on March 13.The shooting took place when the home Taylor, a front-line health care worker, shared with her boyfriend, Kenneth Walker, was raided by three plainclothes officers. Police said the “no-knock” warrant was related to drugs.Walker, 27, called 911 as shots rang out, and bullets were exchanged between the officers and Walker, a licensed gun owner, according to Sam Aguiar, an attorney for Taylor’s family. “Questions have been raised … about how and why the search warrant was approved,” Louisville Metro acting Police Chief Robert Schroeder said at a news conference Wednesday. “As a result of those questions, I have placed Det. Joshua Jaynes, who applied for the warrant, on administrative reassignment until those questions can be answered.”No charges have been filed in connection with Taylor’s death. The officers who responded that night were previously reassigned.Taylor was suspected by the police of participating in drug trafficking but no drugs were found in the home, police said. Copyright © 2020, ABC Audio. All rights reserved.

COVID-19 live updates: 7 states accounting for about half of new cases
Is delta more dangerous for children? Pediatrician answers top back-to-school questions
‘South Park’ creators ink reported $900 million deal for 14 Paramount+ movies; show to run through 2027
Unvaccinated patient in hospital pleads for others to get vaccine: ‘I want to help as many people as I can’
COVID-19 live updates: Moderna vaccine 93% effective against symptomatic disease after 6 months
Defense Secretary to announce mandatory COVID vaccinations for troops ‘soon’: Sources