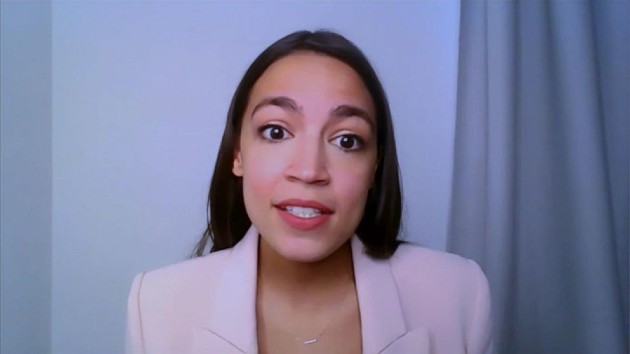 By JACK ARNHOLZ, ABC News(NEW YORK) — Rep. Alexandria Ocasio-Cortez, D-N.Y., called President Donald Trump’s tweets touting a conspiracy theory about the 75-year-old protester police officers knocked to ground “reprehensible.” “It was horrendous and horrific. The president targeted a 75 year old man — justice loving man — who who wanted to stand up for his neighbors and wanted to stand up for his fellow black Americans,” Ocasio-Cortez told ABC News chief anchor George Stephanopoulos on Good Morning America Wednesday. “To target him when everyone saw on video exactly what happened is just such a reprehensible — such a reprehensible act — and it just goes to show how far we have to go in the fight for justice in this country,” she added.On Twitter Tuesday morning, Trump suggested that 75-year-old Martin Gugino, who remains hospitalized in serious condition after being shoved to the ground by two Buffalo, New York, police officers, may be an “ANTIFA provocateur” and that the whole incident could be part of a “set up.”

Gugino’s lawyer has since called the president’s accusations “dark, dangerous, and untrue.” “No one from law enforcement has even suggested anything otherwise so we are at a loss to understand why the President of the United States would make such dark dangerous, and untrue accusations against him,” Kelly Zarcone said in a statement of the president’s accusation against her client, who she said has been released from the ICU but remains hospitalized. The two officers involved in the incident have been charged with second-degree assault. The officers pleaded not guilty at an arraignment on Saturday.Joining Democrats who blasted Trump’s comments were several Republican voices — mostly those who have at times been critical of the president in the past. When asked for her reaction to the tweet, Sen. Lisa Murkowski, R-Alaska, told reporters, “This is not good.” “I just saw that this second. It just makes no sense that we’re fanning the flames right at this time,” Murkowski told reporters on Capitol Hill Tuesday. The president’s comments came as congressional Democrats unveiled sweeping police reform legislation Monday in the wake of the national outcry after George Floyd’s killing.”What I do think is incredible (is that) House leadership … have listened and they’ve introduced a sweeping bill in the Justice and Policing Act,” Ocasio-Cortez told GMA. While the Democrats’ bill would ban police officers from the use of chokeholds and introduce a national registry to track misconduct committed by officers, House Speaker Nancy Pelosi dismissed calls to “defund the police” on Monday, telling reporters she “(wants) to work with our police departments.” Ocasio-Cortez, a supporter of calls to “defund the police,” said Wednesday, “The New York City Police Department has a $6 billion a year budget that is more than we spend on youth, housing, health care and homelessness combined in New York City. So the problem is not a lack of resources here. In fact, many folks here in our community say the problem is the opposite.”When pressed by Stephanopoulos about data that showed a correlation between the number of police officers on the street and a lower prevalence of crime, Ocasio-Cortez said that calls to “defund the police” are criticisms of many departments’ outsized budgets.”It’s not always just about the number of officers on the street. It’s about these police precincts that have tanks, that have military weaponry, and frankly have a degree of material resources and warlike weaponry that people ask why does a local police precinct have this in the first place?” she said. “People always say ‘how are you going to pay for it’? What this movement is doing first and foremost — it’s important to note — that this is directed at city councils and mayors. And so you should look to see if your city is having this conversation,” she added. While calls to “defund the police” have already seen pushback from both Republicans and Democrats, Ocasio-Cortez compared the rallying cry to that of “Black Lives Matter.” “Just a few years ago, everyone said that Black Lives Matter polled poorly, that it was divisive, that it required too much explanation. But these are everyday people going out into their communities saying this is what we want for ourselves and for our city council budgets,” she said.