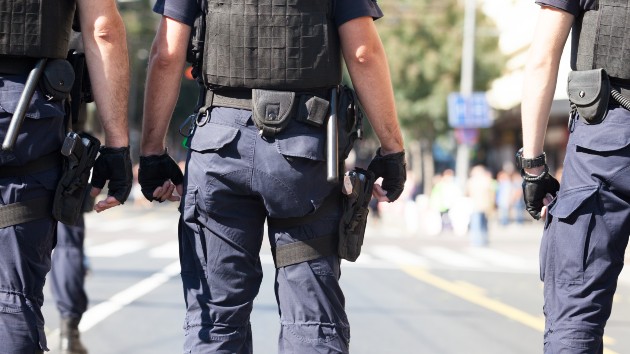 (WASHINGTON) — Despite repeated Trump administration assertions that the antifa movement has hijacked the ongoing protests around the country sparked by the police killing of George Floyd, a new federal intelligence bulletin points to white supremacists and other would-be domestic terrorists as the main problem lurking behind potentially lethal violence.Though the document issued by the FBI, Department of Homeland Security and National Counterterrorism Center also includes a warning to law enforcement about anarchist extremists, it makes only a limited mention of the left-leaning, loosely affiliated antifa movement, and appears to undercut recent criticisms of the movement by President Trump and top administration officials.“Based upon current information, we assess the greatest threat of lethal violence continues to emanate from lone offenders with racially or ethnically motivated violent extremist ideologies and [domestic violent extremists] with personalized ideologies,” according to the bulletin, which was obtained by ABC News.“Additionally,” the document notes, “anarchist extremists continue to pose the most significant threat of targeted assaults against police, as well as targeting government buildings and police vehicles for damage, sometimes with improvised incendiary devices.”While experts previously told ABC News that the ideology of some antifa adherents includes anarchism — along with socialism and communism — mention of the movement itself in the bulletin is relegated to a footnote. It says, “Some anarchist extremists self-identify as ‘Antifa,’ a moniker for anti-fascist that is also used by non-violent adherents. Identifying with ‘Antifa’ or using the term without engaging in violent extremism may also be constitutionally protected.”The intelligence bulletin was distributed to law enforcement agencies around the country and titled “Domestic Violent Extremists Could Exploit Current Events to Incite or Justify Attacks on Law Enforcement or Civilians Engaged in First Amendment-Protected Activities.”It says would-be domestic terrorists “including militia extremists and [groups] who advocate a belief in the superiority of the white race have sought to bring about a second civil war, often referred to as a ‘Boogaloo’ by intentionally instigating violence at First Amendment-protected activities. Racially charged events, coupled with the accompanying widespread media attention, and the rapid dissemination of violent online rhetoric by [extremists], are likely to remain contributing factors to potentially ideologically motivated violence.”The bulletin falls into a pattern established since the start of the nationwide protests sparked by the death in Minneapolis of Floyd under the knee of a white cop who has since been charged with second-degree murder. The Trump administration, led by the president, his national security adviser and Attorney General William Barr, have all pointed to antifa as the cause of violence and fear.On Tuesday morning, Trump tweeted a wild and unproven conspiracy theory that the 75-year-old man seriously injured by Buffalo police at a demonstration last week “could be an Antifa provocateur.”“Martin Gugino was pushed away after appearing to scan police communications in order to black out the equipment,” Trump wrote. “I watched, he fell harder than was pushed. Was aiming scanner. Could be a set up?”An attorney for Gugino called the president’s accusations “dark, dangerous, and untrue.”During a news conference last week, Barr singled out antifa as well, saying “we have evidence that antifa and other similar extremist groups, as well as actors of a variety of different political persuasions have been involved in instigating and participating in the violent activity.”But even before the new intelligence bulletin was put out, official reports issued by law enforcement and intelligence agencies have consistently pointed mainly to what is considered the opposite side of the political spectrum from antifa. Their warnings have said the real danger facing the public and even protesters comes from the fringe right, specifically white supremacists and anti-government militia-type groups.Monday’s bulletin was distributed to law enforcement agencies and senior government officials the same day Virginia prosecutors said they are investigating as a possible hate crime the incident in which an admitted member of the KKK allegedly drove into a crowd of protesters.“As protests continue, the threat of potential violence created by [domestic extremists] towards civilians, law enforcement, and other targets will likely remain,” the document says. “The FBI, DHS and NCTC assess [domestic extremists] will likely continue to seek to exploit First Amendment-protected activity by using violence and/or encouraging others on social media and messaging applications to use violence. We are also concerned other [extremists] may mobilize in response to the current civil unrest to conduct ambushes or attacks on law enforcement or civilians outside the context of First Amendment-protected activities.”FBI spokeswoman Kelsey Pietranton told ABC News, “While our standard practice is to not comment on specific intelligence products, the FBI routinely shares information with our law enforcement partners in order to assist in protecting the communities we all serve. The FBI respects the rights of individuals to peacefully exercise their First Amendment rights, and we remain focused on our mission of protecting the American people and upholding the Constitution of the United States.””We would advise individuals taking part in non-violent protest activities to remain aware of their immediate surroundings, and to report any suspicious, violent, or illegal activity to local law enforcement,” Pietranton said.Copyright © 2020, ABC Audio. All rights reserved.