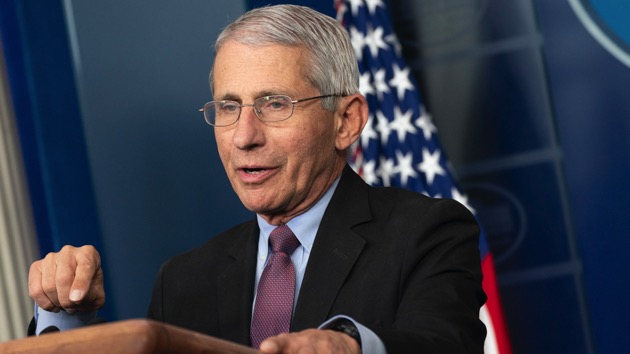 By MORGAN WINSOR, ABC News(WASHINGTON) — As tens of thousands of people across the United States protest against racism and police brutality, the nation’s leading infectious disease expert expressed concern from a health perspective on how the demonstrations may hinder the fight against the novel coronavirus.Although many protesters have been wearing masks and distributing hand sanitizer, it’s virtually impossible to maintain any social distancing at a mass demonstration. That issue of physical separation “is important,” according to Dr. Anthony Fauci, the director of the National Institute of Allergy and Infectious Diseases and a key member of the White House coronavirus task force.”Masks can help, but it’s masks plus physical separation,” Fauci said in an interview on Good Morning America Wednesday.”When you get congregations like we saw with the demonstrations,” he continued, “that’s taking a risk.”Fauci’s comments come as members of the District of Columbia National Guard have reportedly tested positive for COVID-19, following mass protests across the nation’s capital last week. National Guard spokesperson Lt. Col. Brooke Davis told The Associated Press they will not release the exact total of infected troops but that they believe it is not a large number, at least so far. Thousands of National Guard troops were on duty in Washington, D.C. for the civil unrest.Fauci said on GMA that the report “is certainly disturbing but is not surprising.” He added that he “wouldn’t be surprised” if some of the people who were there demonstrating were also infected.”Many of them would then go back to where they were [from] because not everyone was demonstrating in the city where they live,” he said. “So it’s the kind of things that we were concerned about and, unfortunately, we’re seeing it come true right now.”While there’s lower risk for the virus to be spread outdoors, especially in a moving crowd, many of the recent demonstrations have culminated in police officers shooting tear gas and using pepper spray and protesters lighting fire to cars and buildings. Smoke, pepper spray and tear gas cause coughing, and coughing aerosolizes the virus, increasing the risk that it will spread, according to Michael Osterholm, director of the Center for Infectious Disease Research and Policy at the University of Minnesota.Meanwhile, an ABC News analysis has found that at least eight states across the country — including Arizona, Arkansas, Mississippi, North Dakota, South Carolina, Tennessee, Texas and Utah — are experiencing an increase in coronavirus-related hospitalizations since May 25. Some states are seeing more significant spikes than others, but in many of the states, public health officials or local experts told ABC News they consider the increases to be related to a reopening of the economy or a disregard of social distancing guidelines, including not wearing masks.The increases in hospitalizations also come nearly two weeks after Memorial Day weekend, when some people were seen flouting social distancing rules at crowded bars and packed pool parties, which experts said is most likely contributing to the spikes. It is likely too early to gauge the impact of nationwide protests, according to experts.Arkansas is seeing the highest increase since May 25, when there were a little over 80 patients hospitalized with COVID-19 in the state. As of June 7, that number is up to 173 — a nearly 65.8% jump. Tennessee isn’t far behind with a 65.1% increase.Jodiane Tritt, executive vice president of the Arkansas Hospital Association, said some hospitals are starting to get “nervous.””We are starting to see some hospitals being nervous about capacity,” Tritt told ABC News, “but we feel pretty confident that the collegiality and the collaboration among the hospitals around the state can meet the demands of patients.”As the country moves toward fully reopening, Fauci cautioned that it doesn’t mean “all bets are off.””You still should be wearing a mask. You still should be trying as best as possible to have that physical distancing. You still need to wash your hands as often as you possibly can,” he said. “And avoid congregation in large numbers.”