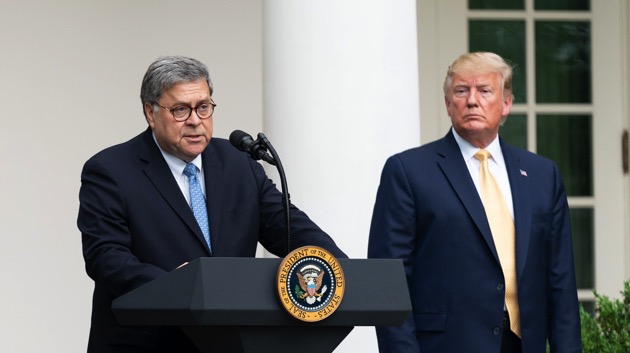 By LIBBY CATHEY, ABC News(WASHINGTON) — Attorney General William Barr has directly contradicted President Donald Trump’s claim that he went to a White House bunker for an “inspection” last Friday night during large protests outside.Barr, instead, said the move was recommended by Secret Service due to escalating security concerns.”Things were so bad that the Secret Service recommended the president go down in the bunker,” Barr told Fox News Monday. “We can’t have that in our country.”Barr’s account contradicts Trump’s insistence that he was the one who made the decision to go to the bunker “for an inspection,” claiming it was a routine visit like ones he’d made before.Multiple senior level sources familiar with the matter told ABC News the White House briefly went into its highest security level last Friday prompting the move.The underground command center, known as the Presidential Emergency Operations Center, serves as a secure shelter that presidents have used in the past during terrorist attacks.Reporting that Trump was forced to take shelter led to the president’s critics circulating “Bunker Boy” on Twitter. The following Monday, he gave a speech on “law and order” and walked outside the White House for a photo op at nearby St. John’s Episcopal Church after Lafayette Square was cleared of protesters.As Trump made a statement threatening to use the military to deal with violent protests from the House Rose Garden, police fired pepper balls and smoke canisters on largely peaceful civilians.Barr’s interview with Fox comes one week after the controversial photo op, which he also took part in with the president.Pressed further on his controversial order to clear the protesters from Lafayette Park, Barr said he wouldn’t do anything different in retrospect.He also claimed security asked him to move back from his visit to the park prior to the crowd’s forced dispersal because they observed “certain projectiles” like “rocks” and “bottles” being thrown and landing in his direction.Barr on Sunday told CBS’s Face the Nation that the president’s walk and the clearing of the protesters were “not connected.””I didn’t know that the president was going to be speaking later that day,” he said.While Barr confirmed he made the decision to expand the perimeter, he has distanced himself from the tactical operation to push back the protesters.Asked for details about the president’s reported movement to the bunker last week, White House spokesman Judd Deere said, “The White House does not comment on security protocols and decisions.”Copyright © 2020, ABC Audio. All rights reserved.