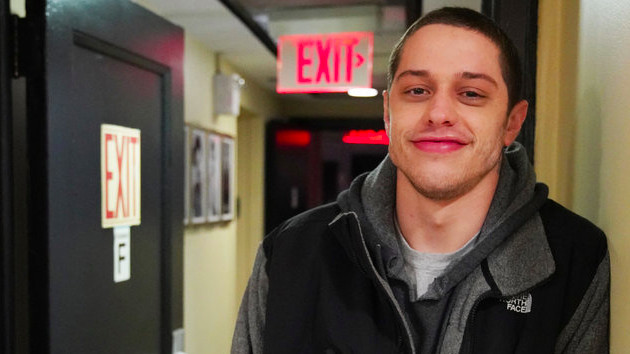 (NEW YORK) — Pete Davidson is hitting back at rumors that he may be exiting Saturday Night Live.

In an interview with Entertainment Tonight, the 26-year-old comedian said he doesn’t have plans to leave anytime soon.

“I will be there as long as they allow me to be,” he remarked.  The King of Staten Island star has been a part of the show since 2014, becoming one of the youngest cast members in the show’s history.

“I think I’m very lucky to be on that show and I’m really lucky to have Lorne Michaels as, you know, not only a mentor and a boss, but a friend,” continued Davidson. “I’ll be there as long as they allow it.”

On top of becoming one of SNL’s youngest cast members, he also became the first regular to be born in the 90s.

Davidson opened up about what it was like joining the long-running series when he was just 20-years-old.

In a separate interview with CBS Sunday Morning on June 7, the comic admitted he didn’t even know SNL was still on the air when he was asked to audition.

“When you’re 16, you’re not watching, like, political midnight shows,” he admitted before affirming how grateful he is to have been given the opportunity because it “changed my life.”

“It felt like very ‘Make a Wish-y… It felt like charity for sure,” detailed Davidson, who touched upon how joining SNL led him to other roles in film and television, such as The Rookie and What Men Want.  He added that SNL allowed him to start “being taken seriously as a comic.”

However, he did admit he felt like a fish out of water when he first joined the show, remarking, “I was like 10 – 12 years younger than everybody else. It felt like it was a joke.”