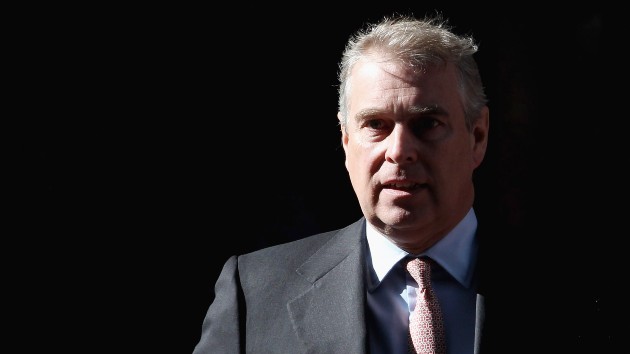 By AARON KATERSKY, JAMES HILL and JOSH MARGOLIN, ABC News(NEW YORK) — Federal prosecutors in New York have formally requested testimony, through the United Kingdom, from Prince Andrew, as part of the criminal investigation into the alleged co-conspirators of convicted sex offender Jeffrey Epstein, two officials familiar with the matter told ABC News.The request was made through a Mutual Legal Assistance treaty to the British Home Office, which is the typical process. The Justice Department, notably, did not make a request through Buckingham Palace, but rather decided to ask for the U.K.’s help in compelling the royal’s testimony.Prince Andrew is only a witness and is not the target of the investigation, ABC News has previously reported.A spokesman for the Southern District of New York declined to comment. The Justice Department also declined to comment.The U.K. Home Office typically does not confirm or deny the existence of a Mutual Legal Assistance request, except where disclosure is necessary to obtain the cooperation of the witness, according to the British manual for such matters.The U.S. Attorney for the Southern District of New York, Geoffrey Berman, has previously sought to encourage Prince Andrew’s cooperation.”The Southern District of New York and the FBI have contacted Prince Andrew’s attorneys and requested to interview Prince Andrew, and to date Prince Andrew has provided zero cooperation,” Berman told reporters on Jan. 27.In a November statement, the Duke of York said, “I am willing to help any appropriate law enforcement agency with their investigations.”Prince Andrew has long denied any involvement in the wrongdoings of his late friend Epstein, the famed financier and convicted sex offender who was found dead in an apparent suicide in prison while awaiting trial for sex trafficking.Sources have told ABC News the investigation of Epstein’s alleged co-conspirators is ongoing and has focused on Ghislaine Maxwell, Epstein’s former girlfriend and associate.Prince Andrew may be able to provide information about his interactions with Epstein and Maxwell in New York, the Virgin Islands and London — three places where Epstein owned property, and where he allegedly took his victims. Copyright © 2020, ABC Audio. All rights reserved.