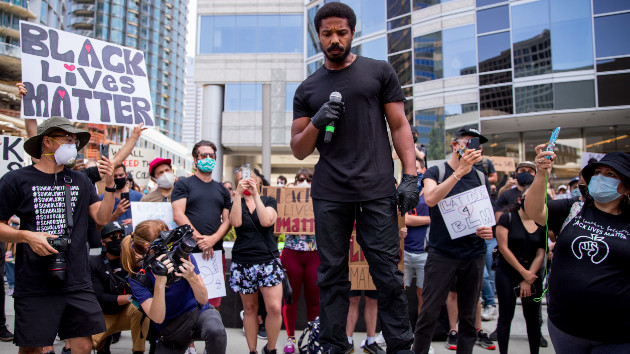 (LOS ANGELES) — Michael B. Jordan is calling on Hollywood to invest in diversity.During a protest in Los Angeles Saturday, the actor and producer delivered a speech in which he touched on the inequalities in the entertainment industry.“I want us to invest in black staff,” he said. “I’m proud to have an inclusion rider and all that good stuff, and I use my power to demand diversity, but it’s time the studios and agencies and all these buildings we stand in front of to do the same.”The protest, in support of the Black Lives Matter movement, was organized by the Big 4 talent agencies: CAA, UTA, WME and ICM Partners. It took place outside the ICM building in Century City.“You committed to a 50/50 gender parity in 2020. Where is the challenge to commit to black hiring?” Jordan continued. “Black content led by black executives, black consultants. Are you policing our storytelling as well?”He added, “Let us bring our darkness to the light. Black culture: the sneakers, sports, comedic culture that you guys love so much. We’ve dealt with discrimination at every turn. Can you help fund black brands, companies, cultural leaders, black organizations?” Jordan’s 2019 film, Just Mercy, which he starred in and produced, has been made available to watch for free for the month of June, as an educational resource on systemic racism.  The film tells the story of Bryan Stevenson, the real-life civil rights activist and founder of the Equal Justice Initiative, a legal center for inmates who didn’t receive proper legal representation.

“Where is the challenge to commit to black hiring? Black content lead by black executives, black consultants. Are you policing our storytelling as well? Let us bring our darkness to the light.” – @michaelb4jordan to Hollywood at #BLMprotest(🎥: @ProducerTommy/@blacklovedoc) pic.twitter.com/hN58ssXEcT

Pfizer and Moderna to expand size of vaccine studies in 5- to 11-year-olds
This doctor helps Olympians with their sleep. Here are his tips to sleep like a champion.
McCarthy, Republicans on Jan. 6 committee, trade jabs ahead of 1st hearing
Trump inauguration head pleads not guilty to being foreign agent
Portman slams Pelosi’s threat to delay infrastructure vote
Lightning strikes pose danger to already fire-ridden West