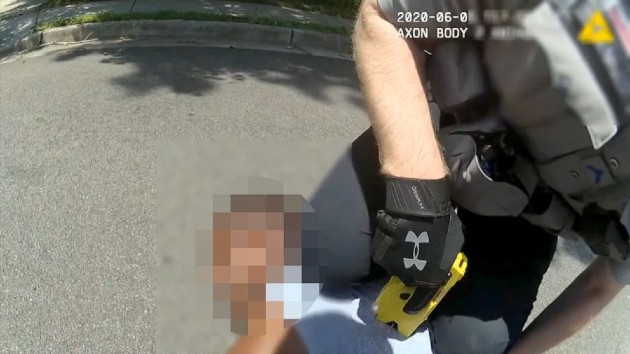 By MEREDITH DELISO, ABC News(FAIRFAX, Va.) — A white Virginia cop has been charged with assault after police and prosecutors reviewed body camera footage that appeared to show him using a stun gun on a disoriented black man.The Fairfax County police chief said he was “disgusted” after viewing the footage, which he said showed Officer Tyler Timberlake deploy an electronic control weapon and “escalate further” the situation.”The video also erodes the public’s trust of police officers, not only in Fairfax County but throughout this world,” Col. Edwin C. Roessler Jr. said Saturday at a press briefing on the incident. “These acts are unacceptable.”

Cops were responding to a 911 call on Friday afternoon in the Mount Vernon neighborhood of Fairfax County about a man “walking in the street shouting that he needed oxygen,” Roessler said. The unidentified man was having some type of “episode,” he added.In the video, which the police department released to the public, someone can be heard attempting to get the man off a residential street and into an ambulance up the block. Another person, who appeared to be a medic, also addressed the victim, saying, “I’m here to help you, so tell me what you need.”While the man is walking on the street, the video appeared to show Timberlake approach and deploy a stun gun multiple times and put his knees on the man’s back. The victim repeatedly shouts “No!” and says “I can’t breathe” several times after being handcuffed.Timberlake was charged on Saturday evening with three counts of misdemeanor assault and battery and faces up to 36 months of incarceration. He turned himself in to the Fairfax County Magistrate’s Office on Saturday and was released on a personal recognizance bond, according to the Fairfax County Police Department’s Media Relations Bureau.ABC News’ attempts to reach Timberlake’s attorney were unsuccessful.Timberlake has been an officer for eight years and was assigned to the Mount Vernon District, Roessler said. The police chief said he is unable to comment on Timberlake’s personnel history at this time.Along with Timberlake, the other officers involved in the incident have been relieved of their law enforcement duties and placed on paid administrative leave pending criminal and administrative investigations, Roessler said. The other officers have not been charged.Timberlake’s “horrible use of force” will undergo an independent review by the Fairfax County police auditor, Roessler said. The county appointed its first independent police auditor in 2017.The victim was treated at a local hospital and released and as of Saturday night was “at home resting with his family,” Roessler said.Fairfax County Commonwealth’s Attorney Steve Descano called the footage “unsettling” and stressed the importance of body-worn cameras in this investigation.”We are fortunate that this technology was in use in the region of the county within which this incident occurred,” he said at Saturday’s news briefing. “Without it, I fear we would have had an unfortunately narrow and somewhat distorted view of what happened in one of our own neighborhoods.”The incident comes amid mass demonstrations across the U.S. protesting against police brutality and racism following the death of George Floyd on May 25 while in police custody. In that case, second-degree murder, third-degree murder and manslaughter charges have been filed against Derek Chauvin, the ex-officer who prosecutors say held his knee on Floyd’s neck for nearly nine minutes.Chauvin is set to make his first court appearance on Monday; his attorney has not commented on the case. Three other officers have been charged with aiding and abetting second-degree murder and aiding and abetting manslaughter. Attorneys for two of the officers said the rookie cops tried to urge Chauvin to stop. All four officers have been fired.