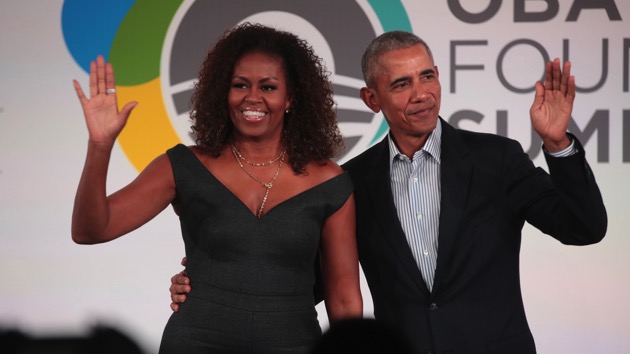 By MEGAN STONE, ABC News(WASHINGTON) — The graduating class of 2020 received a very special and powerful message from the Obamas in YouTube’s “Dear Class of 2020″ virtual commencement ceremony on Sunday.Former President Barack Obama and former first lady Michelle Obama issued a joint speech at the start of the nearly four-hour ceremony, remarking how excited they were for the graduating class before telling them to hug their dads and call the family members who made a positive impact on their lives.”Hold your heads high and celebrate,” Barack cheered before Michelle gave the outgoing class permission to do a little dance.”Embarrass yourselves,” she said with a laugh while busting her own moves as her husband chuckled.

Their lighthearted and goofy tone, however, was toned down later in their speeches.”I am here today to talk to you not as the former first lady, but as a real live person: a mother, a mentor, a citizen concerned about your future and the future of our country,” Michelle said.She touched on the COVID-19 pandemic and protests over George Floyd’s death, saying, “If any of you are scared, or confused, or angry, or just plain overwhelmed by it all, if you feel like you’re searching for a lifeline just to steady yourself, you are not alone. I am feeling all of that, too. I think we all are. So, I want you to know that it’s OK to be confused.”Michelle added that neither she, nor her generation, have all the answers to America’s problems, noting that things would be much different if they had. Then she concluded with three life lessons: Life will always be uncertain, treat others with compassion and never be afraid to speak up.

She went on, “Anger is a powerful force. It can be a useful force. But left on its own, it will only corrode and destroy and sow chaos on the inside and out. But when anger is focused, when it’s channeled into something more, that is the stuff that changes history.”Barack shared a similar message.”I’ll admit that it’s a little unfair to lay such a heavy burden on you,” he said. “I wish that my generation had done more to solve some of our country’s big problems so you didn’t have to. But the good news is that I know you’re up to the challenge. You are the best-educated generation in history.”The former POTUS, too, had advice for the new grads: Do what’s right, listen to each other and have faith in democracy.

And he urged the class of 2020 to vote.”Democracy isn’t about relying on some charismatic leader to make changes from on high. It’s about finding hope in ourselves and creating it in others. Especially in a time like this,” he concluded.