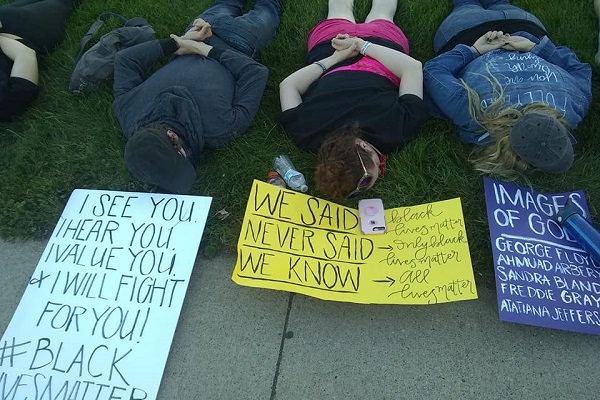 DuBois, PA – A peaceful protest brought about a hundred people together in the spirit of racial equality Saturday in the DuBois City Park.

Police were on hand to make sure that everything was safe. Participants walked around the perimeter of the park with signs, many of them related to Black Lives Matter.

Although there was a smaller protest last week in the DuBois City Park, it has grown significantly since then. The organizers say a lot of planning took place, including talking with law enforcement and writing out a mission statement for what the protesters wanted to accomplish.

The evening ended with a moment of silence for 9 minutes as protester laid face-down on the ground in honor of George Floyd.

There was also a candle lighting afterward, with everyone encouraged to bring a photo of someone who was unfairly treated and deserved justice (racial injustice, LGBTQ, domestic violence, etc).

Today's peaceful protest ended with a further demonstration and a candlelight vigil for all victims of abuse.

The DuBois peaceful demonstration has started. A growing group is circling the DuBois City Park.They have demonstrations scheduled all this afternoon and an evening vigil.

A peaceful demonstration is circulating the DuBois City Park.

Peaceful protesters are lined up in front of the DuBois City Park now asking for racial equality.

St. Marys, PA – An event called Come Together: Rural PA for Racial Equality gathered people together at the Diamond in St. Marys on Sunday. In addition to the protest, there were also activities and discussions where people could learn about their privilege, politicians spoke about the need for diversity and equality, and a moment of silence remembered the victims of racial injustice.

Glenn Thompson Speaks at St. Marys gathering on June 7th, 2020. This was followed by a prayer by Luke Daghir.

Clearfield, PA – There were very few issues during a peaceful and relatively united demonstration at the Clearfield County Courthouse on Friday for a Black Lives Matter protest.

The gathering remained fairly peaceful, although a local Second Amendment group is on hand to deal with any troublemakers. One man who was yelling loudly and playing a siren sound effect was asked to leave. A few arguments were calmed down by asking the instigators to walk away from the area.

The reports of people being brought in on buses seems to be unfounded. Most protesters say they live in Clearfield or the surrounding communities.

It’s a respectful, peaceful protest in Clearfield today at the courthouse in honor of equality and the Black Lives Matter movement.

There’s an air of unity at the Clearfield County Courthouse for a Black Lives Matter protest. The gathering has remained peaceful, although a local Second Amendment group is on hand to deal with any troublemakers. One man who was yelling loudly and playing a siren sound effect was asked to leave. The reports of people being brought in on buses seems to be unfounded. Most protesters say they live in Clearfield or the surrounding communities.

The crowd at the Black Lives Matter protest at the Clearfield County Courthouse has grown, but it remains calm. Protesters say they are standing with their friends and neighbors to end the silence of systematic racism. Watch the video to hear some of their voices and opinions.

A local Second Amendment group is helping protect protesters in Clearfield and keep the peace. Although there may be a variety of opinions here tonight, the two groups agree that every American has the right to peacefully protest and demonstrate.

DuBois, PA – Friday at 3 p.m. at the Clearfield County Courthouse, protesters will be gathering for a peaceful demonstration and holding signs. Click Here to check out the full report and see videos from the event.

Also Friday, there was a small demonstration at the Elk County Courthouse in Ridgway from 4 until 6 p.m.

This Saturday, a peaceful demonstration is scheduled for the DuBois City Park at 2 p.m.

Then on Sunday in St. Marys at 2 p.m., protesters will also be gathering at The Diamond.

For all of these local demonstrations, organizers have made it very clear that it will be a non-violent, non-aggressive showing of support of equality and drawing attention to racial disparities, especially regarding how the black community has historically been treated by police and the justice system.

If you are attending these demonstrations, either as a participant or observing, please do not escalate tensions or encourage violence. Practice social distancing and wear a mask.

The First Amendment to the United States Constitution ensures the right of the people to assemble peaceably.

Specifically for the DuBois demonstration, the DuBois Little League teams and families have been asked to leave the fields at noon so DuBois City Police have time to assess the area and get ready for the protest at 2 p.m.

A message from the City of DuBois:

On June 6, 2020, beginning at 2 p.m. protestors are gathering for a peaceful protest in DuBois City Park.

The organizers have met with the City of DuBois and explained that it is a peaceful protest and they are expecting approximately 200 people.

The City and Township are not anticipating any problems or issues, but DuBois and Sandy Township Police Departments will be fully staffed and working cooperatively together to ensure the protection of the safety and welfare of businesses, residents, and general public in the area.

Listen to some of the comments from protesters.

Peaceful protesters met on Liberty Boulevard tonight. They say they are planning another peaceful protest soon.Listen to Sunny 106 tomorrow morning for more details.

For safety concerns, the organizers have suggested that participants do not engage with anyone attempting to make them angry or incite violence. Read the tips for keeping things safe.

The organizers met the with local police chief and gone over a list of simple guidelines and intentions.

A basic outline of the events of the day are as follows. Participants are meeting in the DuBois City Park area along the Boulevard around 2 p.m. to gather, organize, and discuss. Anyone who would like to, is welcome to bring musical instruments, art supplies, etc. Participants are welcome to hang signs while using our best judgement in regards to the little league, school, and public traffic signals. Be respectful.

The organizers say the ultimate goal is to, not only show opposition to the systemic, discrimination and injustices suffered by many different communities in our country, but to bring light to different organizations dedicated to helping those to heal and recover.

Our basic timeline of events is as follows.

5:00pm-ish- Walk the perimeter of the park in small surrounding areas. (This is out of respect for the police, EMT and fire departments who worry about being stretched too thin, should something go wrong.)

7:00pm-ish- Main demonstration to lay, face down with arms pinned along the Blvd and in the grass in front of the Amphitheatre for a duration of 8 minutes and 26 seconds. We will be reading the names of many who have been hurt/killed and not seen justice. We will remain silent for the last 2:53 of this time; the amount of time in which George was unresponsive.

Anyone who would like to RESPECTFULLY light a candle (with photo or poster etc.) In honor of someone lost to violence or discrimination is welcome to do so. This goes for anyone. Veterans, homeless, victims of domestic Violence, victims of sexual assault, member of the LGBTQ+ community and so on.

The plan is to light the candles at 9:25pm; Georges recorder time of death.

Anyone who would like to share their art/poster making supplies is welcome to do so. If anyone would like to bring food to share, we ask that it be prepackaged and not homemade in order to avoid any potential complications. Participants are asked to BE RESPECTFUL. Don’t throw your trash everywhere. Don’t throw your cig butts on the ground.