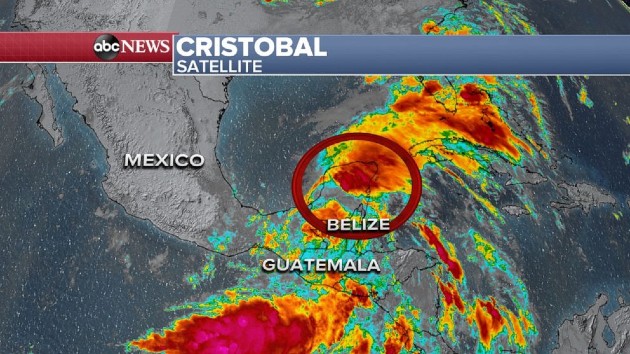 By MAX GOLEMBO and MEREDITH DELISO, ABC News(NEW YORK) — Louisiana has declared a state of emergency ahead of Tropical Storm Cristobal.The storm system weakened into a Tropical Depression Thursday, but it is expected to gradually strengthen as it moves toward the United States. Once it makes landfall, it will likely become a Tropical Storm.Cristobal is forecast to approach the Louisiana coast by Sunday evening, with winds up to 60 mph.It brought heavy rain and flooding to parts of Mexico and Central America, and now, the same is expected to happen in the U.S. Flood watches have been issued for much of Louisiana, including Baton Rouge and New Orleans, which could see up to 4 inches of rain by the weekend and into early next week.Louisiana Gov. John Bel Edwards declared a state of emergency Thursday, suspecting that the storm could soon make landfall in the state.”While it is still too early to know for sure what impact Cristobal could have on Louisiana, now is the time to make your plans, which should include the traditional emergency items along with masks and hand sanitizer as we continue to battle the coronavirus pandemic,” the governor said in a statement.Central and southern Florida are also under flood watches for the rest of the week due to tropical moisture combined with an upper level disturbance. The ground is already saturated from the previous week’s rain.Meanwhile, severe weather, including large hail and a few tornadoes, is possible Thursday night in the Northern and Central Plains.Severe storms are also forecast from Oklahoma City to the Texas panhandle. Copyright © 2020, ABC Audio. All rights reserved.

Tyra Banks defends Olivia Jade ahead of her ‘Dancing with the Stars’ debut: “Olivia is so brave”
Murdaugh murders and mysteries timeline: Key events in the South Carolina family’s scandals and deaths
Alaska once had the highest vaccination rate. Now it’s in a COVID-19 crisis.
In theaters now: Gerard Butler and Frank Grillo in the “irreverent, explosive” ‘COPSHOP’
‘Ted Lasso’? ‘WandaVision’? ‘Mare of Easttown’? Who will clean up on Sunday’s Emmy night?
Jennifer Aniston says season 2 of ‘The Morning Show’ ﻿will tackle cancel culture