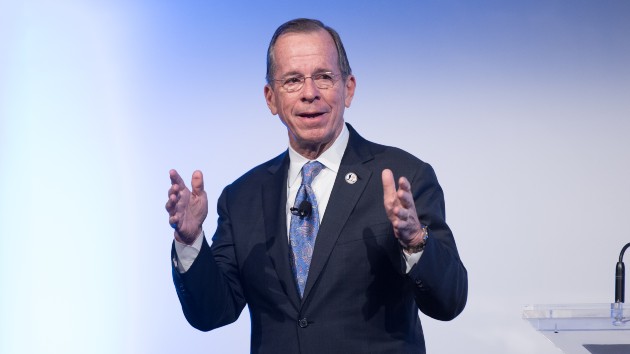 By ELIZABETH MCLAUGHLIN, ABC News(WASHINGTON) — Former chairman of the Joint Chiefs of Staff Adm. Mike Mullen told Americans on Tuesday the country was at an “inflection point” with recent events making it “impossible to remain silent.”His words, shared in an op-ed in The Atlantic, were striking — not just because of Mullen’s strong condemnation of the president’s leadership in the aftermath of George Floyd’s death — but because the retired four-star Navy admiral has, like many former military leaders, tried to remain apolitical.In a conversation with ABC News’ Chief Global Affairs Correspondent Martha Raddatz on Thursday, Mullen, who served at the chairman from 2007 to 2011, said it was racial injustice that propelled him to speak up, as well as fears that President Donald Trump was politicizing the U.S. military.He told Raddatz that he was horrified seeing the video of Floyd being killed by Minneapolis police officer Derek Chauvin on May 25.”While no one should ever condone the violence, vandalism, and looting that has exploded across our city streets, neither should anyone lose sight of the larger and deeper concerns about institutional racism that have ignited this rage,” Mullen wrote in his op-ed. “As a white man, I cannot claim perfect understanding of the fear and anger that African Americans feel today. But as someone who has been around for a while, I know enough—and I’ve seen enough—to understand that those feelings are real and that they are all too painfully founded.”He called the images of law enforcement, backed by the National Guard, clearing peaceful protesters out of Lafayette Square with smoke canisters and pepper balls so the president could pose for a photo outside St. John’s Church “sickening.””Whatever Trump’s goal in conducting his visit, he laid bare his disdain for the rights of peaceful protest in this country, gave succor to the leaders of other countries who take comfort in our domestic strife, and risked further politicizing the men and women of our armed forces,” he wrote.Mullen told Raddatz that these recent events have reminded him of the unrest that swept the country in 1968, when he was at the U.S. Naval Academy. The U.S. military worked for decades to recover its reputation after the Vietnam War, he said, and now he fears the president will again tarnish the trust citizens put in the institution.”We have a chance that we will lose the American people if we let the military become politicized,” Mullen told ABC News.In his op-ed, Mullen wrote that tackling police brutality and “sustained injustices against the African American community,” as well as defending First Amendment rights, are “not mutually exclusive pursuits” and neither “will be made easier or safer by an overly aggressive use of our military, active duty, or National Guard.””The United States has a long and, to be fair, sometimes troubled history of using the armed forces to enforce domestic laws,” Mullen said, adding that while he has confidence in the military to obey lawful orders, he is “less confident in the soundness of the orders they will be given by this commander in chief.”Mullen is part of a growing chorus of former senior military officers — who have also worked to remain apolitical — criticizing the administration’s response to Floyd’s death and the subsequent nationwide protests against systemic racial inequality. He previously worked as chairman of the Joint Chiefs of Staff under George W. Bush and Barack Obama.After Defense Secretary Mark Esper called on governors on Monday to “dominate the battle space” so that civil unrest “dissipates,” former chairman of the Joint Chiefs of Staff Gen. Martin Dempsey tweeted, “America is not a battleground. Our fellow citizens are not the enemy.”Ret. Army Gen. Tony Thomas, who led U.S. Special Operations Command, similarly questioned the phrase, tweeting, “Not what American needs to hear…ever, unless we are invaded by an adversary or experience a constitutional failure…ie a Civil War…”Esper has since said that “in retrospect,” he would “use different wording so as not to distract from the more important matters at hand or allow some to suggest that we are militarizing the issue.”But perhaps the most striking condemnation came from Trump’s former defense secretary James Mattis, who in his own op-ed in the The Atlantic declared the president “the first…in my lifetime who does not try to unite the American people — does not even pretend to try.”Mattis, a retired four-star Marine Corps general, said that “all of us should be able to get behind” “what protesters are rightly demanding,” and similarly warned against militarizing the government’s response.”Enough is enough,” he told Raddatz on Wednesday.On Thursday, the Pentagon made the decision to send home some of the active duty troops stationed outside the Washington, D.C. area, a defense official told ABC News. Approximately 700 infantry soldiers from the 82nd Airborne Division’s “Task Force 504” will return to Fort Bragg. Meanwhile, military police units from Fort Bragg and Fort Drum remain on standby in case they are called upon to quell violence — though the majority of protests have been peaceful.As of Thursday morning, thirty-two states and the District of Columbia had activated their National Guards to assist state and local law enforcement in responding to protesters with 32,400 personnel currently supporting the mission, according to the National Guard.