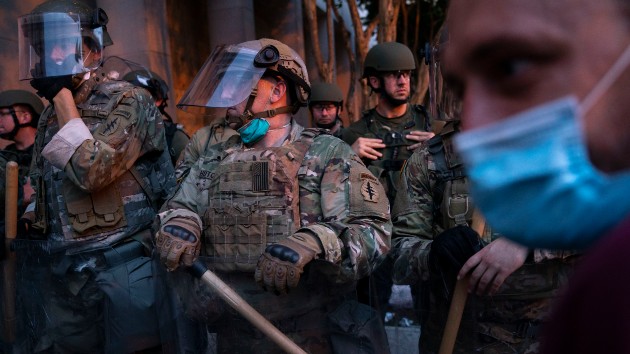 By JAMES GORDON MEEK, LUIS MARTINEZ and MATT SEYLER, ABC News(WASHINGTON) — On Wednesday night, after five days of at-times violent confrontations between police and thousands joining protests near the White House, a group of U.S. Army special operations soldiers for the first time fell into formation to face off with the angry crowd.Many immediately noticed the arrowhead patches of the Army’s Special Forces on the left sleeves of the unarmed, but baton-carrying Utah National Guard troops in multicam uniforms, who joined the security perimeter with a myriad of law enforcement officers and wondered why they were there — and whether they should be there at all.”I’m kind of horrified by seeing the junta-looking Guard guys around D.C. I hate the optics of it,” retired Army Special Forces Col. Robert Wilson told ABC News Thursday.Wilson is a Green Beret and former commander of 3rd Special Forces Group (Airborne), who was counterterrorism director in the Trump administration’s National Security Council prior to retiring from active duty in 2017. The soldiers from the Utah-based 19th Special Forces Group (Airborne) were those guarding his former workplace on Wednesday.He was among many who noticed in photos spreading across Twitter as the night wore on that the group of guardsmen included fellow Green Berets with “Special Forces” tabs alongside young special operations support soldiers near the White House, who were shouted at by protesters enraged over the death of George Floyd in Minneapolis last week.The Trump administration ordered 3,300 National Guard troops from several states into the District of Columbia to assist the 1,200 D.C. Guardsmen and police agencies quelling the unrest, which has left dozens of police injured and instances of fires, vandalism and looting of stores all over the nation’s capital.The use of guardsmen to deal with protests nationwide has stirred controversy, even prompting public rebukes by two former chairmen of the Joint Chiefs of Staff on Wednesday and by Trump’s former Secretary of Defense James Mattis. Putting soldiers from secretive commando units into the fray may erode the public’s trust in the military, some argue.”The public can’t differentiate between units and patches, but there were comments last night on social media about spec ops coming in, and so from that aspect, it’s not good,” Wilson said. “You can see paranoia about that spreading.”Fortunately, there was little violence reported Wednesday night in the city, which was still under curfew ordered by the mayor.”It’s pretty calm,” one of the service members told the Army Times when asked just past midnight Thursday how the day had gone.

“So far, so good,” another soldier told the newspaper, which covers the Army, but is privately owned.A National Guard spokesperson told ABC News that the special operations soldiers on the street had been preparing for a different mission when the need arose for more guardsmen on the ground in Washington.”The Utah Army National Guard sent a number of Special Forces guardsmen to support civil authority in Washington, D.C. The reason they were selected and sent is because they were already prepared for deployment. They were chosen for expedience, not their skillset,” the spokesperson said.

Another retired Green Beret, Lt. Col. James Gavrilis, said the selection of troops from a commando unit was not well thought out, but was skeptical it was anything nefarious concocted by the Trump administration.”I’d be last person to say Special Forces guys should be out there. But those guys on the line aren’t trying to instigate the protesters,” Gavrilis told ABC News. “Why put SF guys on the line around the White House? Well, they’re a little older and more seasoned guys, who are actually going to deescalate situations.”Mick Mulroy, a former CIA officer and Marine who until last year was a deputy assistant secretary of defense for Middle East policy at the Pentagon, said many in the defense establishment had bristled this week when Defense Secretary Mark Esper told governors facing violence in the protests to “dominate the battlespace.” Sending in troops from a commando unit did nothing to calm nerves even if they are unarmed, he said.”Cities of the United States are not a battlefield. When you use terms like ‘dominate the battlespace,’ this is the image they may conjure up,” said Mulroy, now an ABC News contributor.Many of the Special Forces soldiers were photographed wearing sunglasses close to midnight — likely because eye protection was ordered, since other soldiers were wearing clear ballistic eyewear — and it projected a strange image, he said.”Are the optics good that you have these elite soldiers who specialize in clandestine missions overseas on the streets of D.C.? Probably not,” Mulroy said. “The optics are not ideal, particularly if they set themselves apart by wearing sunglasses at midnight. But Special Forces soldiers are mature soldiers and very good under pressure. If protesters are concerned about their presence, our military leaders should explain their presence.”Another ABC News contributor, retired U.S. Secret Service Agent Donald Mihalek, said elite guardsmen may have skills necessary if violence sparks on the streets again, but placing them face to face with protesters now blocked from Lafayette Square Park across from the White House may not have been helpful in calming the tension of a hard week in America.”Clearly they’re still playing catchup with all the violence and plugging holes, and they didn’t have the opportunity to do the strategy they needed to,” Mihalek said.”It’s just not helpful at all,” said Wilson, the retired Green Beret commander.Copyright © 2020, ABC Audio. All rights reserved.