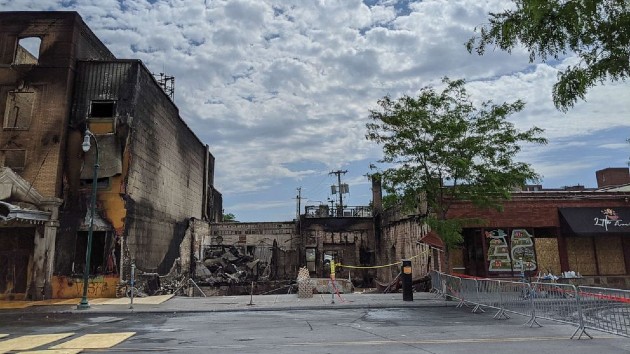 By CATHERINE THORBECKE, ABC News(MINNEAPOLIS) — Some $4.5 million has been raised to rebuild the historic and diverse Lake Street area of Minneapolis, after it suffered immense damage amid protests over the killing of George Floyd that have rocked the nation over the past week.Businesses along the 6-mile strip, known for its large Latino and Somali American population, have faced looting and fires that have left every single one “affected in one way or another by this,” Theresa Swaney of the Lake Street Council, a local nonprofit that is spearheading fundraising efforts, told ABC News.”We understand why these protests are happening, and we believe in the need to seek this justice for George Floyd,” she said. “As an organization we’re trying to move forward and support our businesses because that’s our mission.”Swaney said she hasn’t seen anything like this in her memory, but that most of these businesses were already struggling because of the coronavirus pandemic.”I’d say it’s more than a double hit, a triple, quadruple, hit,” she said of dealing with the damage, on top of the financial strains from the pandemic. “People were struggling with COVID, businesses around the country were struggling, and Lake Street was no different.””A lot of them can’t even reopen now because they’ve been looted; they have no inventory, they have no shelves,” she said. “It’s going to take a lot for them to reopen and be able to serve their communities.”The area was known and beloved in Minneapolis specifically for its diversity, with Swaney saying, “A large number of the businesses on Lake Street are either owned by immigrants or people of color.””Those are the small mom and pop shops that will have trouble rebuilding and coming back to life after this; that’s really where our funds are dedicated towards — are helping those businesses that spent 10 years saving up and now have nothing,” she said.Swaney said the damage to the area ranged from broken windows to entire buildings being burned down, and many businesses were looted.Swaney said that the offices for their nonprofit have been completely burned. They were all working from home due to coronavirus, but they found out “nothing in our office will survive.”So far, $4.5 million has been donated through their website from approximately 50,000 donors in a week.Swaney said she agrees with those on social media who have been saying that property can be rebuilt while lives — such as Floyd’s — are gone forever.”I don’t think it means that we can’t support the rebuilding of Lake Street as well,” she said. “We also know that it will take money to rebuild the buildings.””Many of these buildings are 100 years old or more and they served our community because they were affordable to rent, and provided spaces for these minority and POC-owned businesses,” she added. Copyright © 2020, ABC Audio. All rights reserved.