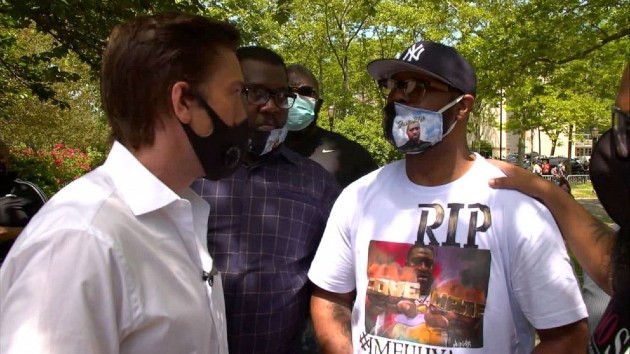 By ENJOLI FRANCIS, ESTHER CASTILLEJO and ERIC NOLL, ABC News(NEW YORK) —  Terrence Floyd, the brother of George Floyd, whose death after being restrained by police officers has sparked protests and calls for justice and an end to racism all over the U.S. and the world, spoke to ABC News anchor David Muir at a Brooklyn, New York memorial, telling him that “we’re all standing together for the cause of justice.”Terrence Floyd addressed thousands of supporters who attended a vigil Thursday in Brooklyn for George Floyd.George, 46, originally from Houston, Texas, died in Minneapolis on Memorial Day after a police officer placed his knee on George’s neck for nearly nine minutes, according to prosecutors.In video taken by a bystander, George could be heard saying, “I can’t breathe,” as Officer Derek Chauvin restrained him. Chauvin is now facing second-degree and third-degree murder and manslaughter charges. Three other officers who were present during the arrest have been charged with second-degree aiding and abetting felony murder and second-degree aiding and abetting manslaughter.All four officers were fired from the force.At the vigil Thursday, held at Brooklyn’s Cadman Plaza Park, Terrence and his family told Muir, the anchor of World News Tonight, that they hope their tragedy marks a turning point in the U.S.Thousands gathered for the vigil — black, white, LatinX and of various backgrounds — to pay their respects to the Floyd family and to demand justice for George.”You know, when I see stuff like this, I cry, because it just shows me… that we’re all one,” supporter Mickia Williams told Muir. “We’re all loved.”On the stage, an emotional Terrence was lifted by a sea of faces in the crowd, many who were holding signs, kneeling and calling out: “George Floyd,” “I can’t breathe” and “Justice now!””I want to thank God,” he told the crowd. “Because at the end of the day, my brother’s gone, but the Floyd name still lives on.”He told supporters that while he was proud of the protests, he was not proud of the looting and violence that had overshadowed demonstrators’ message.”My brother wasn’t about that,” he said. “The Floyds are a God-fearing family.””Power to the people. Not just my people. Not just your people. Not just the people they think is important or whatever. I’m talking about power to the people. All of us,” he said to the crowd.As the thousands began to march from Cadman Plaza Park and across the Brooklyn Bridge to Manhattan, Terrence described to Muir that moment speaking in front of the crowd.”I just knew… my brother was proud. … I know the whole Floyd family was proud of that. Because we’re all standing together. … And I just appreciate it. We all appreciate it,” he said. “My brother up there in heaven appreciates it.”He told Muir that hearing the crowd yell out his brother’s name resonated with him for a special reason.”That’s my father’s namesake, so not only do I hear my brother’s name, I hear my father too. You know what I’m saying?” Terrence said.”My father’s gone. My brother is gone. They up there together. So when I heard that name, it just, it made me feel good,” he told Muir.