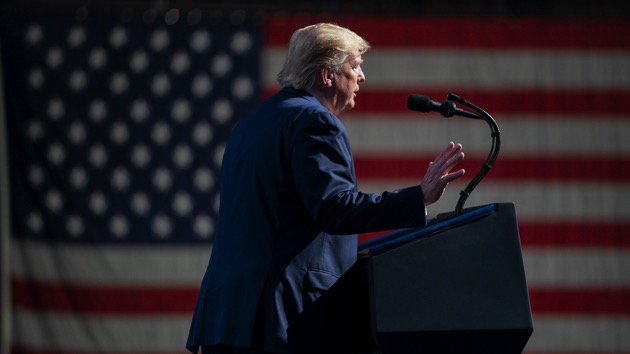 By WILL STEAKIN, ABC News(WASHINGTON) — President Donald Trump’s re-election effort is set to resume in-person campaigning next week for the first time since the coronavirus pandemic sidelined their massive ground game operation nearly three months ago, multiple sources with direct knowledge of the efforts tell ABC News.Trump Victory, the joint effort between the Trump campaign and Republican National Committee, will flip the switch next week for its “summer kick off,” sending volunteers and staffers back on the ground for door knocking, in-person training sessions, and voter registrations, multiple sources tell ABC News.The return of on-the-ground campaigning, which the president’s team had made a core strategy of his re-election effort investing millions in recruiting and training over a million volunteers nation-wide, marks the latest move the president’s team has made toward returning to traditional campaigning amid a pandemic that halted efforts months back.State teams across the country had been informed weeks ago to develop their own plans to return to in-person campaigning, with June being eyed as the return timeframe since early May, sources familiar tell ABC News.“Starting next week, Trump Victory field teams will resume in person volunteer activities and campaigning where states allow. Just as Trump Victory was able to transition to virtual campaigning in less than 24 hours, our teams across the country will seamlessly adapt again just as efficiently,” RNC National Press Secretary Mandi Merritt said in a statement to ABC News.While it’s not immediately clear how many state teams will be reactivated, officials say volunteers and staff will adhere by local guidelines and take necessary safety precautions including abiding by capacity limits, exercising social distancing, and wearing masks while they are door knocking. States will began to hit the campaign trail as local COVID-19 guidelines permit, a Republican source said.Trump Victory North Central Florida has already started publicly recruiting more volunteers for a return to canvassing next week.The return to on-the-ground campaigning for the Trump campaign and RNC comes as the president’s recent polling numbers show him trailing presumptive Democratic nominee Joe Biden.In a new Monmouth national poll out this week, the former vice president has an 11 point lead over President Trump, with 52% of registered voters saying they’d support Biden if the election was held today and 41% saying they would support the president. Biden also holds a 10-point lead over Trump among registered voters in the latest ABC News/Washington Post poll.Volunteers will also be heading back onto the streets as nation-wide protests over the police killing of George Floyd have gripped the nation.In mid March the RNC and Trump campaign completely switched their and on-the-ground campaign efforts online, switching in a matter of days hundreds of planned events to virtual trainings over Zoom while doubling down on phone banking efforts.Since the transition, Trump Victory has made nearly 35 million voter contacts, and in one week alone recently made 10 million calls. The president’s re-election effort stands with a whopping over 1.2 million volunteers trained and activated, according to an RNC official.Trump’s ground operation being reactivated will come as the president himself officially hits the campaign again next week, holding two in-person fundraisers, one on June 11th at a private home in Dallas and another on June 13 at his Bedminster golf club, multiple sources tell ABC News.    An RNC official tells ABC News that “each event site will be professionally cleaned and sanitized prior to the event,” and all attendees will have to test negative for COVID-19 on the day of the event, complete a wellness questionnaire, and pass a temperature screening.Copyright © 2020, ABC Audio. All rights reserved.

Iowa Republican Sen. Chuck Grassley, 88, running for reelection
Harris interview with ‘The View’ delayed after co-hosts test positive for COVID-19
Generational wealth implications: Black and Latino-owned homes are more likely to be undervalued
Let’s-a go! Chris Pratt to voice Mario in upcoming ‘Super Mario Bros’ movie
‘The View’ hosts leave mid-show due to testing positive for COVID-19, miss Vice President Harris interview
Gabourey Sidibe shares the special connection she has to her new podcast thriller ‘If I Go Missing the Witches Did It’