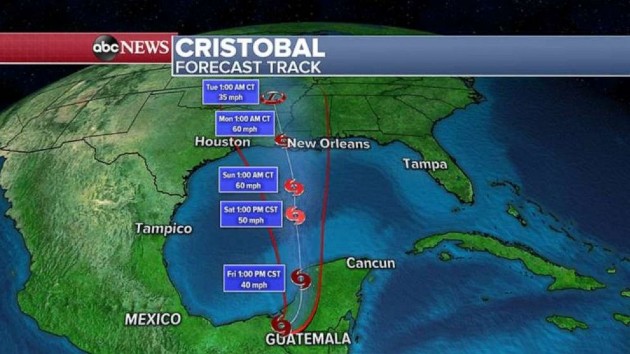 By MAX GOLEMBO, ABC News(NEW YORK) — Tropical Storm Cristobal is over Mexico Thursday, bringing deadly flash floods and mudslides to Central America and Mexico.Cristobal is weaker Thursday morning; it is barely holding on to its tropical storm strength. It is forecast to weaken further throughout the day and will become a tropical depression as it drifts over land.By Friday, Cristobal will move back over the Gulf of Mexico and will begin moving north towards the U.S.Cristobal is forecast to re-strengthen as it heads toward the U.S., but due to the unfavorable atmospheric conditions in the northern Gulf, this tropical cyclone is not expected to become very strong.At this point it will be a tropical strom with winds of 60 mph when it moves onshore in Louisiana, west of New Orleans.Cristobal will be a large storm and will pick up a lot of tropical moisture with it, this means flooding rain will be the biggest threat for the U.S.Already, flood watches have been issued from Florida to Louisiana, where some areas could see more than a half a foot of rain in a short period of time.The European model shows that even though the center will be in Louisiana, the tail end of the storm will stretch all the way to Florida.Meanwhile, a day after a deadly squall line killed three people in the Northeast, the same storm system has stalled and once again damaging winds from Philadelphia and Washington D.C. are in the forecast.Wind gusts reached 93 mph in Beach Haven, New Jersey, 83 mph in Redding, Pennsylvania, and 68 mph in Philadelphia 68 on Wednesday.The Northeast will not be the only region that will see severe weather Thursday — a new storm system will move into the Upper Midwest and the Plains. There, damaging winds, hail and a few tornadoes are possible. Copyright © 2020, ABC Audio. All rights reserved.