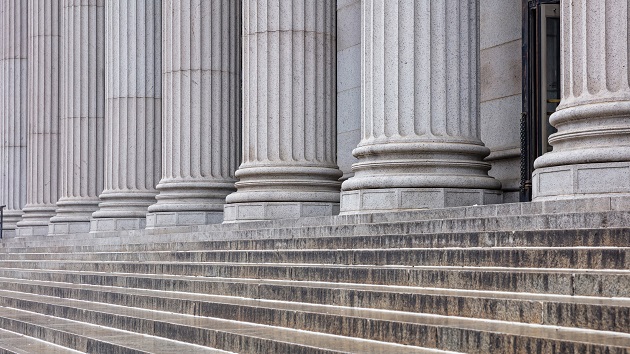 (BRUNSWICK, Georgia) — BY: BILL HUTCHINSONSaying the evidence shows three white suspects “chased, hunted down and ultimately executed” Ahmaud Arbery in Georgia, a prosecutor on Thursday laid out in detail how the 25-year-old black victim tried to run for his life before he was struck by a vehicle and called a racial slur by one of the suspects after being gunned down.The preliminary hearing for Gregory McMichaels, his son Travis McMichaels and William “Roddie” Bryan unfolded with graphic details describing the last moments of Arbery’s life.At one point, testimony from the lead investigator in the case became so graphic Arbery’s mother, Wanda Cooper, walked out of the courtroom.The hearing occurred at the Glen County Courthouse in Brunswick, Georgia. Present in the courtroom was Gregory McMichael, 64, a former Georgia police officer, and Travis McMichael, 34. Bryan was not in the courtroom during the hearing.”We’re here essentially on behalf of the citizens of Glenn County to talk about the fatal shooting of the Feb. 23 incident involving victim Ahmaud Arbery, who was chased, hunted down and ultimately executed we believe the evidence will show based on what’s about to be presented to the court,” said Jesse Evans, an assistant district attorney for the Cobb County District Attorney’s Office, who was appointed special prosecutor in the case.The only witness called on Thursday was Richard Dial, a special agent for the Georgia Bureau of Investigation, who cited video and direct statements from the suspects in the presentation of the case to the court.Under direct examination from a defense attorney, Dial said that Bryan told investigators that during the fatal confrontation, he heard Travis McMichael, who allegedly fired the three shots that killed Arbery, yell a racial slur to the victim as he lay dying on the ground.Arbery was jogging through the Satilla Shores neighborhood of Brunswick when he stopped and went into a house under construction, Dial said. He said the video showed Arbery inside the unsecured house looking around, possible for a water source and then leaving.Dial said Arbery continued jogging past the McMichaels’ home, where Gregory McMichels spotted him and believed he matched the description of a burglary suspect seen on a surveillance video posted online by his neighborhood association.The investigator said Gregory McMichaels armed himself with a .357 Magnum revolver, which had been issued to him when he worked for the Glen County Police Department, and called his son, who armed himself with a pump-action shotgun. Dial said the father and son got into a pickup truck and chased after Arbery, initially stopping him in front of Bryan’s home in the same neighborhood.The McMichaels ordered Arbery to stop, but the victim kept running, Dial said.The father and son chased after him in their truck as Arbery tried to evade them, Dial said.Bryan also got into his vehicle and attempted to use it to block Arbery’s path several times, Dial said. He said Bryan allegedly struck Arbery during the pursuit hard enough that it left a dent in his vehicle.Eventually, Arbery found himself trapped between the McMichaels’ truck and Bryan’s vehicle, Dial said. He said Travis McMichael got out of the truck with his shotgun and that he and Arbery began to fight in the street.Part of the confrontation was caught on a cellphone video taken by Bryan. The footage showed the first shotgun blast hitting Arbery in the chest and showing Arbery’s white T-shirt immediately soaked in blood.Arbery was shot two additional times, once in the upper left chest and in the right wrist.After being shot, Arbery attempted to run but collapsed and died at the scene.The preliminary hearing is scheduled to continue Thursday afternoon.ABC News’ Rachel Katz contributed to this report.

“The world has changed. He hasn’t” – ‘Curb Your Enthusiasm’ teaser reveals premiere date for Season 11
Cameron Diaz reveals she knew Benji Madden was “special” when they first met
Obama gives Democrats a pep talk with Biden agenda in limbo: The Note
Simone Biles says she ‘should have quit way before’ Tokyo Olympics
Report: Lena Dunham marries, Taylor Swift was guest of honor
‘Dancing with the Stars’ season 30 recap: Martin Kove knocked out of the competition