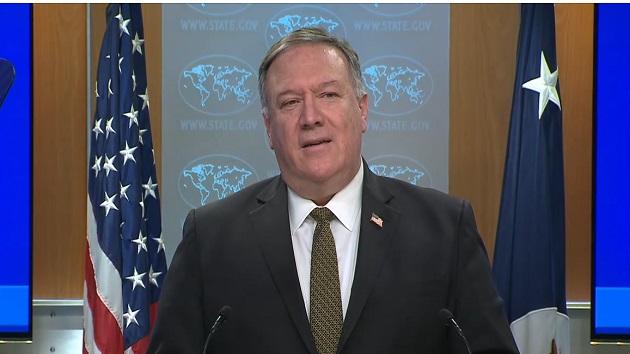 (WASHINGTON) — BY: BENJAMIN SIEGEL, CONOR FINNEGAN, and KATHERINE FAULDERSFired State Department inspector general Steve Linick told lawmakers on Wednesday that his office was conducting two investigations related to Secretary of State Mike Pompeo, and that senior department officials were aware of the inquiries, according to Democratic lawmakers.Over roughly seven hours of testimony, Linick told lawmakers that several senior aides to Pompeo, including Under Secretary of State for Management Brian Bulatao, were aware of the ongoing investigations into whether the secretary was using staff for personnel errands, and the use of emergency legal powers to sell weapons to Saudi Arabia and the United Arab Emirates over congressional objections. Linick also testified that Bulatao tried to “bully” him repeatedly, and told him that his office should not have been investigating the emergency weapons sale. Democrats, in their readout, also said Linick told Congress that Bulatao wanted to supervise an investigation into allegations of a leak of a draft inspector general report to reporters.That undercuts Pompeo’s public comments that he was aware of only one probe and challenges his statement that Linick’s firing was not retaliation for any investigation. Pompeo and President Donald Trump have said Trump fired Linick at Pompeo’s request.”Mr. Linick testified that he was ‘shocked’ when he found out he was being fired, that his removal came without any warning from President Trump or Secretary Pompeo, and that the Administration’s after-the-fact justifications are ‘either misplaced or unfounded,"” Reps. Eliot Engel, D-NY, Carolyn Maloney, D-NY, Gerry Connolly, D-VA, Joaquin Castro, D-TX, and Sen. Bob Menendez, D-NJ, said in a statement.Linick declined to discuss details of the ongoing investigations in his interview, according to sources who participated in the virtual interview. An attorney for Linick declined to comment on the session.Republicans slammed Democrats for their plans to release the transcript of Linick’s interview before hearing any testimony from the State Department as part of their investigation into the inspector general’s removal. They also accused Linick of being more forthcoming in answering questions about his office’s investigations from Democrats than from Republicans.”Releasing Mr Linick’s transcript without the benefit of hearing from the State Department would be the latest in a long line of irresponsible actions by Committee Democrats,” a GOP House Oversight Committee spokesman told ABC News. “We hope the Democrats will take up Mr. Bulatao’s generous offer to come brief them on all the events discussed in today’s interview.”While Bulatao, a Pompeo confidant and West Point classmate, has agreed to brief lawmakers in their probe, Democrats have rejected the offer, and want to question him under oath.Republicans have also tried to challenge Linick’s credibility and further accusations from Pompeo and Bulatao that the Office of Inspector General under his leadership was responsible for leaks — one of the reasons they’ve cited for his firing, without offering specifics.”It’s also still unknown how our Democrat colleagues had detailed information about ongoing IG investigations at State that we were not privy to. We are continuing to look into this matter,” said Leslie Shedd, a spokesperson for the House Foreign Affairs Committee’s top Republican, Rep. Michael McCaul of Texas.Linick was cleared of any wrongdoing in an investigation last fall by the Pentagon’s inspector general. But a GOP aide on the committee challenged that probe, saying it was “limited” and “not thorough” because it didn’t look into text messages or call logs, other OIG employees’ personal emails, or any correspondence with members of Congress and their staff, only with the press, they said.They also faulted Linick for not sharing a final copy with his “superiors” at the department, although it’s unclear if he would have to, given that inspectors general are tasked by law with being independent from their agencies.In his opening statement, obtained by ABC News, Linick defended his record, saying he has “served without regard to politics” under presidents from both parties.Linick told lawmakers his office issued more than 700 reports and saved taxpayers nearly $2 billion. He also invoked the late Sen. Tom Coburn, R-Okla., a conservative fiscal watchdog who he said shared some advice with him when he became an inspector general.”Sen. Coburn told me to never forget that ultimately inspectors general work for the American public. In keeping with that advice, every minute of my work… has been devoted to promoting the efficiency and effectiveness of both agencies, along with ensuring that taxpayer funds are protected against waste, fraud, and abuse,” he said. “In carrying out my work, I have always taken the facts and evidence wherever they lead and have been faithfully committed to conducting independent and impartial oversight, as required by law.”Pompeo first said that he was personally unaware of any investigations into his actions when he recommended Linick’s removal to President Donald Trump. He later added he was aware of one “particular investigation” that he provided answers in writing about, but he did not specify which one and did not participate in an in-person interview for it.”This didn’t have anything to do with retaliation,” he told Fox News last week. “This was about an IG that was attempting to undermine the mission of the United States Department of State. That’s unacceptable.”Linick told lawmakers that he discussed the investigation into alleged misuse of department resources with top agency officials so that department leadership “would not be surprised,” Democrats said in their readout of the session.He also said that Stephen Akard, his acting replacement who still serves as the director of the Office of Foreign Missions, had discussed taking on the inspector general role with people in the office in April, weeks before Linick was formally informed of his firing, according to two participants on the call.While Democrats said Linick believed he had heard no “valid” reasons for his dismissal, Republicans have defended his removal and argued that he served at the president’s pleasure.Democrats are also seeking interviews with at least seven State Department employees who say they may have knowledge of the watchdog’s ongoing investigations.