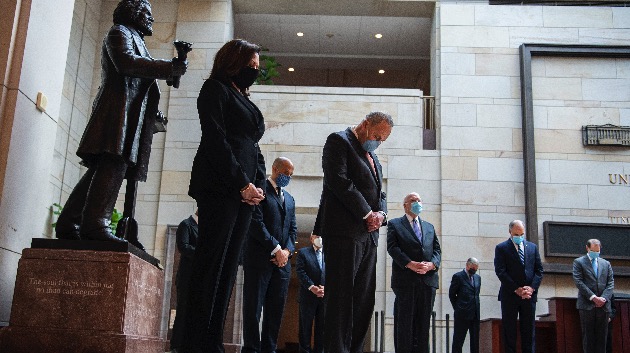 By ALLISON PECORIN, ABC News(WASHINGTON) — Senate Democrats gathered in Emancipation Hall in the capitol building for a moment of silence in memory of the lives of George Floyd, Ahmaud Arbery and Breonna Taylor on Thursday morning.The senators fell quiet for eight minutes and 46 seconds, the same length of time that Officer Derek Chauvin pinned Floyd down with his knee.Sen. Cory Booker led brief remarks before the moment of silence began, speaking to onlookers about Floyd’s life.”Today we gather here in solemn reverence to not just mark his tragic death but to give honor to his life,” Booker said. “We now will pause for 8 minutes and 46 seconds in remembrance of George Floyd.”For the duration of the moment of silence, the senators wore masks and stood six feet apart.Several senators — including Sen. Tim Kaine, D-Va., Sen. Chris Van Hollen, D-Md., Sen. Michael Bennet, D-Colo., and Sen. Martin Heinrich, D-N.M. — kneeled down.Booker again made brief remarks when the silence broke.”George Floyd, Ahmaud Arbery, Breonna Taylor. May we honor those dead by protecting those who are alive,” he said before the senators dispersed.Senate Minority Leader Chuck Schumer spoke about the moment of silence during his floor remarks later on Thursday.”Standing there in silence you feel the horrifying length of George Floyd’s final nine minutes,” Schumer said. “You cannot help but imagine his horror and fear knowing that his trauma, the trauma of his family and friends has been felt buy so many black families and black communities across the country and across the centuries.” Copyright © 2020, ABC Audio. All rights reserved.