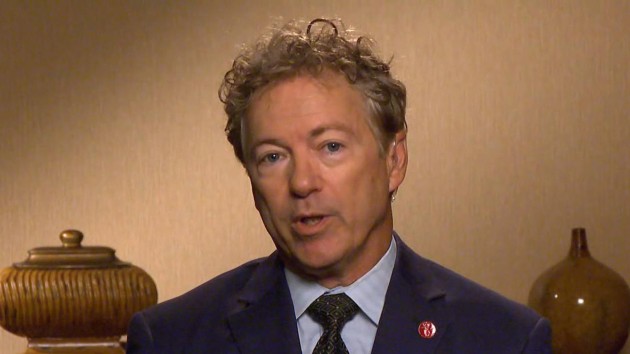 By ALLISON PECORIN, ABC News(WASHINGTON) — Lynching is still not a federal crime in the United States, despite nearly 200 attempts by lawmakers to make it so. Now, as the nation grapples with the death of George Floyd, one lawmaker is standing in the way of allowing the historic passage of a bill that would outlaw lynchings: Sen. Rand Paul, R-Ky.The House has already passed an anti-lynching legislation, which is awaiting approval in the Senate. But on Wednesday, Paul told reporters he has concerns about the bill, which he said might allow more minor altercations to be punishable as lynchings.”Bruises could be considered lynching,” Paul said. “That’s a problem, to put someone in jail for 10 years for some kind of altercation.”Paul agreed that lynching should be “universally condemned,” but said conflating the act with minor offenses does a “disservice to those who were lynched in our history.”ABC News reached out to Paul’s office for clarification and was pointed in the direction of a statement about Paul’s proposed amendment to the legislation.”The bill as written would allow altercations resulting in a cut, abrasion, bruise, or any other injury, no matter how temporary, to be subject to a 10-year penalty,” the statement read. “My amendment would simply apply a serious bodily injury standard, which would ensure crimes resulting in substantial risk of death and extreme physical pain be prosecuted as a lynching.”In order for the Senate to quickly pass the House bill, they would need to agree to it unanimously and without offering amendments. Adding an amendment would require the full vote of the Senate, and would mean that the bill would have to be sent back to the House for additional consideration — a move that would delay the passing of the bill because the House is currently out of session.The National Journal was the first to report that Paul was the senator who was blocking the legislation from proceeding.If passed as it currently stands, the bill would increase the penalty for those who commit certain civil rights violations, already outlawed in U.S. code, if the violator is found to have been conspiring with a group, according to a spokesperson for Rep. Bobby Rush, D-Ill. Rush proposed the legislation on the House side. This gets at the “mob mentality” of a lynching, the spokesperson said.While Paul’s office did not clarify which part of the law might allow bruising and other offenses to be punishable as a lynching, it is possible he was referring to language that already exists in U.S. law, which punishes anyone who “willfully injures” or “intimidates” while committing certain civil rights violations.If the House bill passed, it is possible that those who commit these types of violations — which are not necessarily life-threatening — could potentially face the harsher punishment of up to 10 years in prison if the violation was done in conspiracy with a group and deemed a lynching.The House passed their anti-lynching bill in February, named in remembrance of Emmett Till, a young black teenager who was lynched in Mississippi in 1955. The bill received broad bipartisan support, clearing the House by a vote of 410-4. A nearly identical version passed the Senate in 2019 unanimously.The Senate bill, which was proposed by the three black members of the Senate: Sens. Kamala Harris, D-Calif., Cory Booker, D-N.J. and Tim Scott, R-S.C. The three senators applauded the passage of the House bill in February. The two bills are nearly identical.Paul did not oppose the Senate bill when it passed in 2019.Rush has tweeted about the need to pass the anti-lynching legislation in light of the death of Ahmaud Arbery. He expressed frustration with Paul’s opposition to the House bill.”The language of the Emmett Till Antilynching Act is IDENTICAL to the bill that was unanimously approved by the Senate,” Rush tweeted. “The only conclusion I can draw from @RandPaul’s sudden opposition is he has an issue with the House bill being named after Emmett Till.”When the House passed their legislation on Feb. 26, 2020, advocates were hopeful that the House and Senate measures could be quickly reconciled and the legislation could head to President Donald Trump’s desk before the conclusion of Black History Month.On Wednesday, Scott told Politico that the House could easily move the legislation by taking up the anti-lynching bill that already passed in the Senate. Copyright © 2020, ABC Audio. All rights reserved.

Jill Biden cheers on Team USA as Olympic Games get underway in Tokyo, Japan
Washington state deputy shot and killed in the line of duty
What to know about antibody tests in a post-vaccine world
Key moments from the Olympic Games: Day 1
What is a Golden Slam? Novak Djokovic looks to make men’s tennis history with Olympics
Lack of diversity in higher learning can be a problem for diverse student bodies