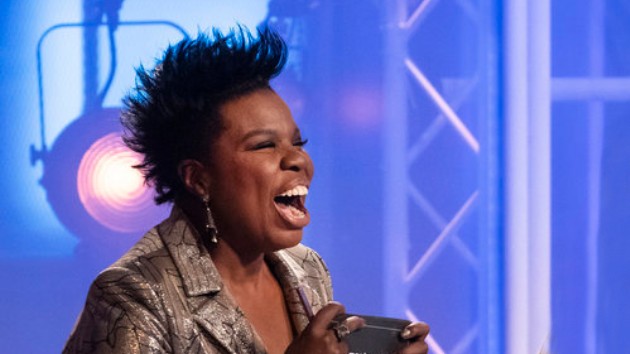 (LOS ANGELES) — Saturday Night Live alum Leslie Jones opened up about the one piece of advice she wishes she could give to her past self when discussing her first brush with rioting during a Tuesday appearance on Late Night With Seth Meyers.

The Ghostbusters star revealed that, in hindsight, she wishes she did things differently.

If given the opportunity to confront her past self, who was “running out to the riots” 30 years ago, Jones revealed, “I would say, ‘Don’t take that sledgehammer."”

The comic explained that, at the time, weilding the heavy tool made her 22-year-old self feel powerful because she “opened so many doors with that sledgehammer.”

Said Jones with a laugh, “I remember I broke…and I have to tell you this.  It was a supermarket and there was a chain fence and [the other protestors] couldn’t get it open. So, I came with my sledgehammer and I was like ‘guh-gash’ and it went open and everybody was like, ‘Yeah!"”

Now, many years later, she sees her actions in an entirely new light.  “I can laugh about it now, but imma tell you, I didn’t laugh when I was riding through my city after that and seeing burnt down buildings and having nowhere to shop,” The 52-year-old soberly explained.  “And, you know, seeing black people crying about their business being burnt down. It wasn’t funny then, you know?”

Beyond confronting her past self about the sledgehammer, what Jones really wishes she could ask is, “What do you think you’re gonna change by going out there with [that sledgehammer]?”

Protests have erupted across the nation in the wake of George Floyd’s death, with many cities imposing curfews following the destructive rioting and looting taking place overnight.

“It was a disaster”: Emma Roberts on her mom accidentally revealing her pregnancy
Coronavirus live updates: Hospitalizations on the rise in 41 US states, analysis shows
NASA to skim the surface of an asteroid and bring a sample home
‘Dancing with the Stars’ season 29 recap: Vernon Davis sent home while four tie in first place
With coronavirus concerns a factor, it’s all tied up in North Carolina: Poll
Viola Davis discusses the challenge of becoming ‘Ma Rainey’ and the gift of working with Chadwick Boseman