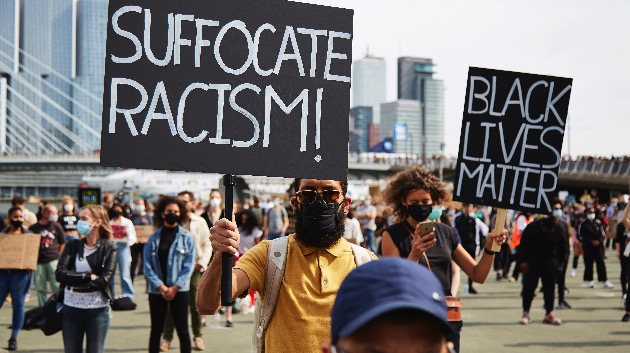 By DEBORAH ROBERTS, SARAH LANG and ANGELINE JANE BERNABE, ABC News(NEW YORK) — As the demonstrations and unrest continue in the wake of George Floyd’s death, the protests are hitting home for many across the country who are trying to understand and learn about the racial disparities and inequities that take place everywhere.For Jamie Jones Coleman, a white mother to two biracial boys named Caleb and Gabriel, the protests, which are challenging the status quo, resonate more than ever.“My boys are viewed in this world as black,” she told Good Morning America. “And as a white parent of a multiracial child is imperative for me to try and help prepare for their world the best that I can.”“I will never purport to completely understand or understand really at all what it is to be a person of color in this country. But I do know what it feels like to love a person of color in this country,” she added. “I think the biggest thing that I’ve realized, being married to a Black man in the United States today is that when people meet me, they never fear me.”Ibram X. Kendi, a professor at American University and the author of books like How to Be an Antiracist and Stamped from the Beginning: The Definitive History of Racist Ideas in America said that he knows Coleman’s comments all too well.“Racial disparities and inequities are everywhere, are all around us, are in almost every neighborhood and institution,” Kendi told Good Morning America.Defining anti-racismIn his book, How to Be an Antiracist, he offers a blueprint for creating a just society and says people need to learn and define terms such as racist and anti-racist, in order to understand and make changes.“You know what it means, what it means to be to be antiracist, is to express antiracist ideas meaning all the racial groups are equals there’s no racial group is better or worse than another. And so to advocate for antiracist policies which are, and these are policies that lead to racial equity and racial justice. “According to Kendi, to be an anti-racist is to “express antiracist ideas, meaning all the racial groups are equals. There is no racial group that is better or worse than another.” Kendi said it also means advocating for anti-racist policies. “These are policies that lead to racial equity and racial justice,” he added.For Jennifer Harvey, the author of Raising White Kids: Bringing Up Children in a Racially Unjust America, she describes the term anti-racist as denying there is a problem and sitting on the sidelines.

Let's see if we can save some black energy.Below, post a resource white people who want to learn about racism can use instead of asking black people to educate them.

“A lot of white people believe all people are created equal and should be treated that way,” said Harvey. “But as white people are they working on challenging structures in institutions, equity outcomes and partnering with people of color to make institutions better to reflect a racially just society? That is anti-racism.”“I think what’s critical for people to understand is, there’s no such thing as ‘not racist,’” said Kendi. “In other words, we’re either being racist or anti-racist. We’re either expressing that the racial groups are equals and we believe that, or we’re thinking that certain racial groups are better or worse than others.”Kendi also made a critical point that it isn’t about being a good or bad person but rather a person who challenges their thinking and ideas and works to admit and change racist tendencies to be actively anti-racist.

For those invested in change, Harvey offers this advice: educate yourself, donated and understand your role.In order to start making steps toward change in and work toward an equal society, Harvey said that conversations must take place. And she described that those conversations will get uncomfortable and mistakes will happen before it gets better.“White people are afraid to talk about race with family in fear of getting it wrong, Black people talk about race in fear of their lives,” said Harvey. “So start talking, have conversations, mistakes will happen but if you make a mistake, then apologize and revisit-otherwise allowing it to continue.”Harvey said that it’s also important that people educate themselves. However, there’s a right way to do so.“Don’t reach out to Black friends and people of color right now to have them ‘help you,’” she said. “This is not the time for white Americans to be asking our black friends or neighbors what we need to know about racism. But we do need to learn about racism from people of color…Google, read texts and books on racism in America and not by white people. Become educated, learn, listen.”Harvey said that another way to become involved is to protest by showing up in the community and supporting an end to racism and donating to organizations that support equality and advance social justice.If you’re in a position to make a financial donation, “actively support both locally and nationally organizations being led by people of color, including businesses racial justice groups and elected officials,” she said. “Show up to stand with people of color in your community who are in the streets, fighting for change.”For Coleman, the past few days have been eye-opening for her, and she’s reflecting on the lessons she’s learned and educating herself day by day.“For me to listen to people of color, to listen to their experiences, to know their truth as best as I can knowing that I will never be in their same world, but I can respect that world and I can listen to their words,” she said.

Biden challenges UN to act together on pandemic, climate change
Line 3 pipeline resistance continues as activists ask Biden admin to shutdown project
Britney Spears makes triumphant return to Instagram, but some fans think someone else is running the account
Those suffering from sickle cell disease may finally be getting some relief as experts work on cure
Biden to focus on ‘intensive diplomacy’ at UN amid tensions with allies
Republicans dig in on debt-limit standoff despite Democratic effort to mount pressure