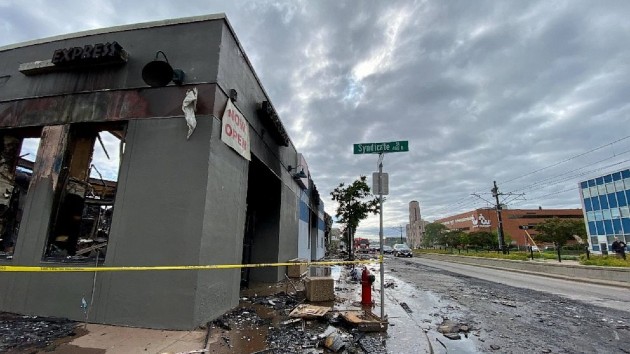 By KELLY MCCARTHY, ABC News(ST. PAUL, Minn.) — On the heels of an already tumultuous reopening timeline from the coronavirus pandemic, businesses across the country have had to board up windows, clean up graffiti and sweep away broken glass as a result of protests that turned into fiery, violent clashes this week. But many black-owned restaurants that sustained severe damage are just as focused on amplifying cries for racial justice as they are on rebuilding.Rekik Abaineh and her husband Solomon Hailie, owners of Bolé Ethiopian Cuisine in St. Paul, Minnesota, told ABC News it was “overwhelming” to see their restaurant reduced to rubble after the first night of George Floyd protests in Minnesota’s Twin Cities.”My husband and I went Friday morning to see what was left of it — and the whole neighborhood was out crying. It was so hard to see the building like that,” Abaineh said.”I’ve never felt this before, the mixed feelings that I have,” Hailie said of the emotional toll of seeing his lifelong dream after 20 years in this country turned to ashes. “To come down to this, believe me, is just heartbreaking.”Protests initially broke out in Minneapolis, where George Floyd died in police custody on May 25, and within days, demonstrations against racial injustice spread across the world.Although Abaineh and Hailie were devastated at the toll of the protests, they said they stand in solidarity with their black community and support the underlying message being echoed throughout the country.”If it means burning our building and our business to get this justice for George [Floyd] and all of Black Lives Matter, we’re OK with that,” Hailie said. “But we can’t bring back any soul – for us we stand by it 100%.””We were very sad to see what happened that day. We totally understand the anger of the people who are out there for justice,” said Abaineh. “If this is what it takes to bring justice to unfairly treated [people] all these years, then we’re fine, we’ll be OK. It’s just the business that we lost and can rebuild in the future.”The pair that introduced zesty Ethiopian fare like Tibs and Kitfo to the local community eight years ago was mere days away from finally opening Bolé Express, a new sister restaurant with a focus on takeout orders and a plan to feed dozens of local health care workers for free.Hailie, who did most of the design and handiwork at the restaurant himself, said he “couldn’t wait for people to come back and see what we’ve done while the pandemic was happening.””We were supposed to start on Saturday and we were planning to be busy. Then this happened on Friday. It’s very sad,” he said.Hailie said Bolé “was more like a home than just a business,” especially for their diverse neighbors, who have rallied to support the beloved restaurant.”There’s a big Somalian community in Minnesota and I’ve seen some of their businesses destroyed too, and I’m seeing the support of their own community to help them,” Abaineh said. “Right now it’s not about color, it’s about humanity — we’re seeing a glimpse of solving the big issue that we have in this country and unity is what needs to be done. You see every corner, whether it’s white or black, trying to work towards that and it’s a beautiful thing that we’re seeing right now.”The restaurant owners said they have asked other friends who’ve lost businesses what they can do to help, “because we’re in this together.””We were staying open during the pandemic because so many people needed our help,” Abaineh said, adding that they gave discounts and even free meals to many local families. “We are more concerned for what’s going on in the country right now. It’s very sad to see all that chaos and businesses that lost a lot, but it’s beyond us.”Lelna Desta, who has worked with Abaineh and Hailie for the last two years, organized a GoFundMe campaign that has already surpassed its $100,000 goal with donations from all around the world.”My husband and I were very nervous to do it or put pressure because we know a lot of people don’t have jobs because of COVID-19,” Abaineh said. “Everyone said you have to do this and Lelna collaborated with the community who wanted to help us.””It’s amazing, I’ve seen people from Europe and Ethiopia donating. It means a lot to us,” she said, adding that the currency exchange rate “is very high” and that she was touched that people from their home country rallied behind them.While Hailie is hopeful that they will eventually rebuild Bolé, he said day-to-day operations are uncertain and expressed his concern for other black-owned restaurants that have been impacted by both COVID-19 closures and now the protests.”I’m worried if they will ever come back again,” he said. “It’s going to hurt the business even worse.”Despite their burned-out building, the owners haven’t let the protests dampen their spirit.”I’m sure everyone in our community would place the same value on what’s going on with the injustice,” Hailie said. “In the meantime we’ve worked so hard, maybe three times more than the average American, to get here. There’s a lot of ups and downs, and no amount of money can bring back that energy that I had put towards this business — but I don’t think I could get back to it with the same energy if it wasn’t for this community.” Copyright © 2020, ABC Audio. All rights reserved.