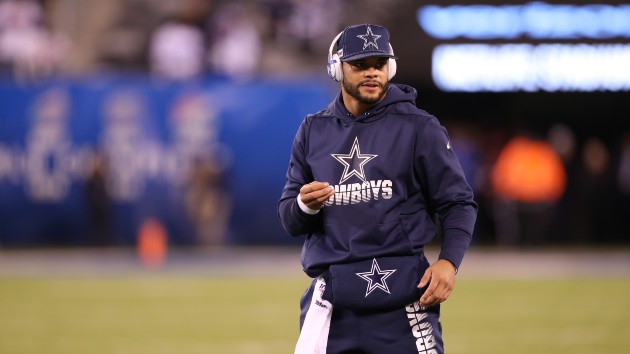 (NEW YORK) — Dak Prescott announced a $1 million commitment to addressing systematic racism and police training in the United States on Wednesday.The Dallas Cowboys quarterback released a four-part statement on his Instagram, sharing his thoughts on the protests in the wake of George Floyd’s death.”As a black, multiracial American, I am disgusted and unsettled! I am as optimistic as they come! I try to understand and find the positive in every situation or aspect of my life,” he said.”My mom left me the word FAITH to live out for a reason. I believe in the good in each individual and this country as a whole! To be humble and to see every man and woman as the same takes humility and accountability,” he continued.He said he’s supporting the protesters standing against racial injustice in the U.S. and views the demonstrations “as a form of strength and an attempt to show we as Black people have rights that aren’t being perceived equally as our counterparts.”The NFL player condemned violence and looting, which have overtaken many peaceful protests across the nation.He stated, however, that he believes cops are “as guilty as the men who stood by Derek Chauvin,” the since-fired police officer who pinned Floyd to the ground, if they do not take a firm stance against the racism that pervades the country.”I have the utmost respect for those of you with a passion for protecting and serving your communities,” he said in a message to officers. “When you choose to wear the badge of a police officer, you pledged to PROTECT life and property through the enforcement of our laws and regulations. How can you claim to uphold the law when those within your own ranks don’t abide by it? You need to hold your own accountable!””As long as cops continue to profile blacks as a threat, cops will continue to be perceived as untrustworthy,” he added. “You have to change yourself before you can ask anyone else to change!”Prescott also shared that while coping with the recent death of his brother, Jace Prescott, who died in April, he realized “we are not given a voice to pronounce how much we matter.””It is our obligation to tell our neighbor how much they matter to us and to take a stand for the greater good of each other,” he said.Prescott said he will “take action” and “act alongside” those protesting against racism. He said the funds he’s donating to various organizations will “address systematic racism through education and advocacy.” Copyright © 2020, ABC Audio. All rights reserved.