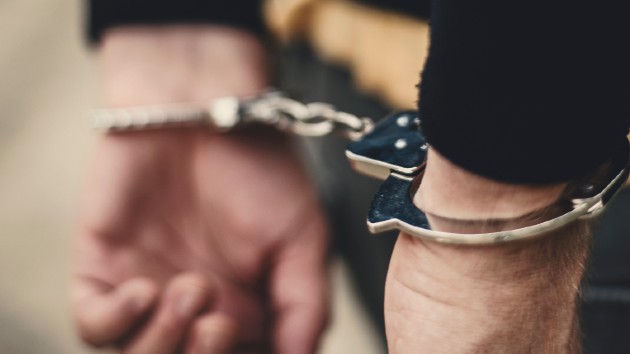 (LOS ANGELES) — Caleb Murray, the son of actor Bill Murray, was arrested on Monday for disorderly conduct at an otherwise peaceful Tillsbury, Massachusetts rally protesting the death of George Floyd, according to a police report obtained by the Martha’s Vineyard Times.

Caleb, one of Murray’s six children, was charged with with malicious destruction of property, a threat to commit a crime, three counts of assault and battery on a police officer, making terroristic threats and disorderly conduct.  Additional charges of making terrorist threats and malicious destruction of property were later thrown out, due to a lack of probable cause, the newspaper reported.

The police report, as per the MV Times, alleges Murray was uncooperative while being transported to the lockup after his arrest, as well as spitting on and biting an officer.

The report further claims Murray was uncooperative at the jail, “attacking deputies” and using “a piece of the cell [he was put into] to not only cut himself but cut the deputies.”  He’s also accused of threatening to burn down buildings once he was released.

Murray was arraigned on Tuesday, during which he was ordered to be held without bail until there was an opening at an evaluation facility.  His bail was later set to $10,000 and he has since been released from custody.

Murray’s case has since been postponed to July 31.

Lack of diversity in higher learning can be a problem for diverse student bodies
Chinese shooter Qian Yang wins 1st gold medal awarded at the Tokyo Olympics
New legislation would require women, like men, to sign up for potential draft
‘Modern Family”s Ariel Winter hopes for “freedom” for Britney, “consequences” for people “who have kept her away”
Rep. Hank Johnson among 10 demonstrators arrested at voting rights protest
Patina Miller and Omar Epps explain why ‘Power Book III: Kanan’ was the perfect series for them to join