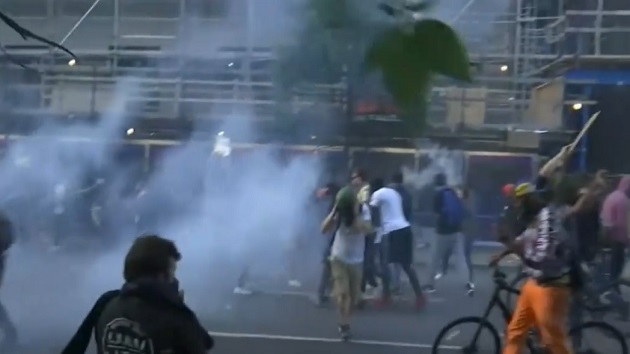 (NEW YORK) — BY: LIBBY CATHEYIf it were up to Arkansas Sen. Tom Cotton, President Donald Trump already would have deployed active duty troops to stop violence across the country.Cotton, a conservative Republican who often has the president’s ear, was facing backlash Thursday after arguing in a New York Times op-ed that Trump should use military force to deal with “looting” and “rioting” following the death of George Floyd in Minneapolis police custody.”One thing above all else will restore order to our streets: an overwhelming show of force to disperse, detain and ultimately deter lawbreakers,” Cotton said in the op-ed titled “Send In the Troops,” calling on Trump to invoke the Insurrection Act.”Some elites have excused this orgy of violence in the spirit of radical chic, calling it an understandable response to the wrongful death of George Floyd,” he wrote. “Those excuses are built on a revolting moral equivalence of rioters and looters to peaceful, law-abiding protesters.”The backlash was immediate.The newspaper was blasted for publishing his op-ed — much of the harshest criticism coming from its own staffers — with the phrase “Running this puts black @nytimes writers, editors and other staff in danger” trending on Twitter Wednesday night.New York Times editorial page editor James Bennet defended the decision, saying the issue “requires public scrutiny and debate.””Times Opinion owes it to our readers to show them counter-arguments, particularly those made by people in a position to set policy,” Bennet wrote in a thread on Twitter. “We understand that many readers find Senator Cotton’s argument painful, even dangerous.”In a rare letter to colleagues Thursday morning, New York Times publisher A.G. Sulzberger also stood by the choice to publish Cotton’s piece, saying, “I believe in the principle of openness to a range of opinions, even those we may disagree with.”The News Guild of New York issued a statement late Wednesday denouncing the New York Times for its “irresponsible choice” publishing Cotton’s piece, calling his words “a clear threat to the health and safety of journalists we represent.”Daniel Drezner, a professor of international politics at the Fletcher School of Law and Diplomacy at Tufts University, responded with an op-ed of his own in The Washington Post, titled: “Don’t send in the troops.””If Cotton truly believes that these protesters are being infiltrated by ‘cadres of left-wing radicals,’ then larger protests will simply offer more opportunities for greater damage,” Drenzer wrote. “Support for this move is soft. Far more senior combat veterans think this would be a horrible idea.”The Insurrection Act Cotton supports invoking is a 213-year-old law that gives the president the power to deploy active military troops on U.S. soil to “restore public order and enforce the laws” when “domestic violence has occurred to such an extent that the constituted authorities of the State or possession are incapable of maintaining public order.”In modern times, presidents have used it to deal with the American agony of racial conflict, relying on the law to uphold federal civil rights in the deep South — a point Cotton made in his op-ed and repeated Thursday on Fox News.”It happened in 1957 at Little Rock Central to desegregate against our racist Democratic governor. It happened in 1968 in Washington D.C., in Baltimore and Chicago. It happened in 1992 in Los Angeles,” Cotton said. “These woke progressives have not engaged with any of these arguments or these historic examples. They are simply throwing a temper tantrum.”The act was invoked in Cotton’s home state in 1957 when President Dwight D. Eisenhower used it to force desegregation and safely escort nine black students into Little Rock Central High School. Arkansas Gov. Orval Faubus, whom Cotton called “a racist Democrat,” used the Arkansas National Guard under the guise of maintaining peace to prevent the students from entering the school.”It is the constitutional duty of the federal government to protect the states from this kind of insurrection violence,” he added Thursday. Cotton first started pushing the idea Monday, and, with a retweet, Trump approved of Cotton’s suggestion to use the active duty military, saying “100% Correct. Thank you Tom!” after the senator suggested the 101st Airborne Division come to the aid of overwhelmed local law enforcement.

“We need to have zero tolerance for this destruction,” Cotton said.

While Cotton has acknowledged the rights of peaceful protesters and expressed sympathy for George Floyd’s family, his strong views align with the president’s, as he points to antifa and the need to do “whatever it takes” to restore order.”If local law enforcement is overwhelmed, if local politicians will not do their most basic job to protect our citizens, let’s see how these anarchists respond when the 101st Airborne is on the other side of the street,” Cotton said Monday on “Fox and Friends.”Hours later, active duty troops from Fort Bragg, North Carolina, were staged outside Washington, D.C. Trump then made a statement suggesting potential use of the Insurrection Act — with or without the approval of state authorities — as police cleared protesters from Lafayette Park ahead of a photo op in front of St. John’s Church.”If a city or state refuses to take the actions that are necessary to defend the life and property of their residents, then I will deploy the United States military and quickly solve the problem for them,” Trump said in the White House Rose Garden.Cotton, an Army veteran who is running unopposed for reelection in November and has presidential aspirations of his own, also released a statement Tuesday condemning “violent anarchists and insurrectionists [whom] were once again allowed to rule the streets last night in too many cities.””The only way to end this insurrection is the overwhelming display of force,” Cotton said, citing increased violence on police amid protests.Cotton was criticized on Monday for tweeting there should be “no quarter for insurrectionists, anarchists, rioters, and looters.”Conservative attorney and Iraqi war veteran David French criticized Cotton for advocating “no quarter” and argued that it has been a war crime since Abraham Lincoln signed the Lieber Code in 1863.

A no quarter order is a war crime, prohibited even in actual insurrection since Abraham Lincoln's signed the Lieber Code in 1863. Such an order is banned by international law and would, if carried out, be murder under American law. https://t.co/YbSw1sM9KW https://t.co/OiNsRT7PPy

— David French (@DavidAFrench) June 1, 2020 Cotton, a Harvard Law School graduate, rejected the criticism and posted a definition from the Collins Dictionary: “Definition of ’no quarter’: If you say that someone was given no quarter, you mean that they were not treated kindly by someone who had power or control over them.”The American Civil Liberties Union called Cotton’s remarks “irresponsible and dangerous” and said they were likely to inflame an already tense situation nationwide.No state governor has asked the president for the help of active duty troops, although several Democrats were quick to reject the idea.As active duty troops remain staged outside the nation’s capital Thursday, it was unclear if the president would invoke the Insurrection Act, as Cotton wants.Copyright © 2020, ABC Audio. All rights reserved.