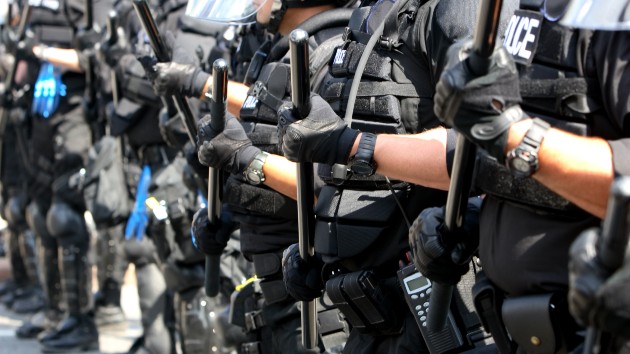 By LUKE BARR and QUINN OWEN, ABC News(WASHINGTON) — Law enforcement units from federal agencies across the board have been brought to Washington to protect the White House and deal with protesters in the nation’s capital, but critics say using them in a show of force has gone too far.President Donald Trump directed Attorney General William Barr “to lead federal law enforcement efforts to assist in the restoration of order to the District of Columbia.”Barr was seen walking on the streets of D.C. Monday night, and inside the FBI command center the night after.There were even riot teams from the Bureau of Prisons in full force outside the White House.A senior Department of Justice official said that Barr deployed BOP riot teams to help cities like D.C. and Miami manage the riots.The ripple effect has been felt in prisons across the country, with facilities going into complete lockdown.Additionally, there has been a deployment of active-duty military officers, aimed to help quell the tension between protesters and law enforcement.The Department of Homeland Security has also deployed hundreds of law enforcement agents.More than 600 DHS staffers were dispatched this week to control demonstrations in the nation’s capital and across the country.The DHS federal agents maintain broad authority and often coordinate with state and local officials prior to appearing at major national events — such as the George Floyd protests.But the display of force seen this week has been shocking, said Peter Vincent, who worked as a chief counsel for the United States Immigration and Customs Enforcement during the Obama administration.”This is not the job of the men and women of ICE or CBP, this is not what they are trained to do, and this is not how their enforcement authorities should be deployed,” Vincent said. “Indeed, these actions are specifically intended to intimidate and chill Americans into remaining silent in the face of obscene injustices.”More than 100 DHS intelligence analysts are assisting state and local authorities nationwide with “real-time updates,” according to the agency.”Clearly, the Metropolitan Police Department would have been unable to establish order in the city,” former U.S. Secret Service agent Don Mihalek said.”Having those federal agencies there was a benefit to the city and the Metropolitan Police Department. They had an automatic force multiplier of federal law enforcement officers who all have who the majority of them have arrest powers in D.C. to supplement and help lock down parts of the city that MPD didn’t have to pay attention to,” Mihalek, an ABC News contributor said.The forces also included federal immigration patrols — ICE swat teams and Border Patrol agents — pulled from their normal duties.Demonstrations are classified by ICE as one of the “sensitive locations,” which the agency typically avoids, but, disruptions to public safety are an exception, an ICE official told ABC News. If a protester is arrested, booked and agents later discover they are undocumented, the official said, the protester would be detained by immigration authorities and possibly deported if a judge gives the order.”U.S. Immigration and Customs Enforcement (ICE) fully respects the rights of all people to peacefully express their opinions,” the agency said in a statement.As Border Patrol agents were called to D.C., Maryland and Virginia, Acting CBP Commissioner Mark Morgan tweeted that “radicals & agitators” prompted the response. Morgan first announced the involvement of CBP agents on Sunday, which he said came at the request of other law enforcement agencies.The ACLU deputy policy director, Andrea Flores, who worked at the DHS during the Obama administration, called the deployment of immigration agents to suppress protests “a mistake that imperils the lives of even more black and brown people.””ICE and CBP are rogue agencies with sordid histories of abuse, violence, and human rights violations,” Flores said in a statement.Copyright © 2020, ABC Audio. All rights reserved.

All pregnant people should get COVID-19 vaccine amid delta variant surge, leading health organizations say
New details on CDC’s Provincetown investigation portray delta variant as serious threat
Front-line workers in Florida say current COVID-19 surge ‘feels like it’s an impending storm’
Dev Patel and Joel Edgerton say they were blown away by their new film ‘The Green Knight’
Why some states are pushing back on masks amid delta variant surge
COVID-19 live updates: US approaching same case numbers as 1 year ago